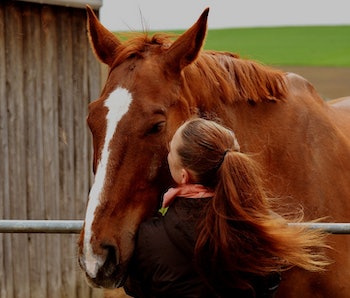 Approximately 5,000 years ago human life was revolutionized by the domestication of the horse and this equine partnership gave people the ability to travel great distances, share culture, and wage a new form of war. Along the way, horses were changed physically and cognitively by this relationship. Presently, scientists are in the process of exploring the extent of those changes, especially when it comes to the ability of horses to read social signals.

In a study released Thursday in Scientific Reports a team of Japanese researchers announced a new breakthrough in understanding horse cognition: For the first time, scientists have determined that horses can integrate human facial expressions and voice tones to perceive human emotion. Importantly, they determined that horses can read the emotions of people, whether or not that that person is familiar to them.

This study adds to a growing understanding that horses have high communication capabilities, likely driven by millenniums of working in tandem with humans.

“Our study could contribute to the understanding of how humans and companion animals send and receive emotional signals to deepen our relationships, which could help establish a better relationship that emphasizes the well-being of animals,” co-author and Hokkaido University researcher Ayaka Takimoto, Ph.D., explained in a statement released Thursday.

To get to that conclusion, the researchers recruited nineteen horses from the equestrian teams of the University of Tokyo and Tokyo University of Agriculture and Technology. The horses were shown pictures of people looking either angry or happy and then played an audio recording of a person sounding gentle or scolding. Sometimes the horses were shown a picture that matched with the emotion portrayed in the recording, and sometimes the two emotions did not match — a methodological technique known as the “expectancy violation method.”

The researchers determined that the horses spent a significantly longer time looking in the direction of the human playing the voice recording when the voice did not match the emotion portrayed in the picture. This happened whether or not the voices in the recordings were familiar to the horse or not — but the horses did spend a longer time looking at the person playing the audio recording when they didn’t recognize the voice being played.

This, the scientists explain, is because an expectancy violation happened when the horses heard a human voice whose emotion did not match the facial expression being shown — the situation confused them, so they spent a longer time trying to figure out what was going on. According to the scientists, this is evidence that horses can integrate human facial expressions and voice tones to perceive human emotion.

That ability is also shared by dogs, another human companion. As social animals, both dogs and horses can utilize emotional cues to retrieve and process social and environmental information — allowing them to maintain a relationship with their herd or pack, but also with the humans who tamed them.