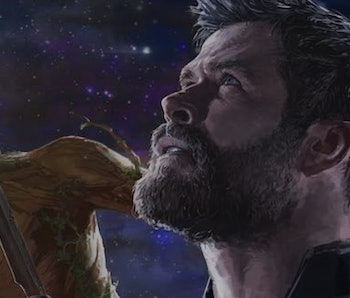 In Avengers: Infinity War, Groot made a small sacrifice when he cut off his arm to make the handle for Thor’s new weapon StormBreaker. Since Groot grew from just a splinter in the Guardians of the Galaxy films, fans wondered if this means there could be a new Groot. One of the Infinity War directors has an answer to that theory.

One half of the Infinity War directing team, Joe Russo, put it simply: he doesn’t know. According to the Huffington Post, Russo wasn’t sure what to make of the theory. “That’s an interesting question,” he said. “I don’t know if every piece of him that detaches… can grow a future version of him, but who’s to say.”

This theory of a new Groot also has ties to another theory about the tree alien. Fans debated on whether Baby Groot was actually the same Groot or another Groot. The director of the Guardians of the Galaxy films James Gunn confirmed that Baby Groot was an all-new Groot. For those in need of a good cry, Gunn also let fans know that Groot’s final word in Infinity War was “dad.”

There are plenty of theories revolving around Infinity War, which the Russo brothers have been able to confirm. In the case of why Bruce Banner won’t transform into the Hulk, Russo confirmed it was because of the conflict between the green monster and Banner. Another theory from the movie is what other heroes survived the finale, which the film directors were able to explain.

Avengers 4 is a year way, and while fans will not see a second Groot, they will finally have some closure after the devastating ending.

As many theories there are for Infinity War, Marvel fans have plenty of ideas of what will happen in Avengers 4. Will time travel be important to the story or will Tony Stark create some kickass weapons for the team to take out Thanos? Everyone will have to wait until May 3, 2019, to find out.