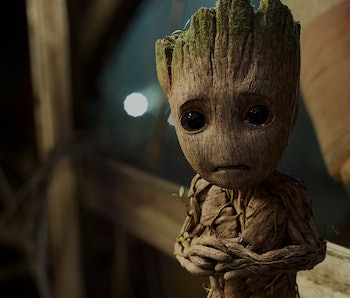 Hey, you should probably sit down, because I have some sad news to tell you. It turns out that Groot, the big, loveable tree from Guardians of the Galaxy, is dead. I’m so sorry, but director James Gunn confirmed Groot’s demise on Twitter. He also revealed that the late Groot was also a dad, however.

The conversation started on Tuesday when Gunn responded to a BuzzFeed writer’s question asking Twitter users if they’d save the life of Baby Groot or a Porg from The Last Jedi, if forced to chose. Gunn was firmly on Team Groot, but he dismissed another Twitter user’s rationalization for saving a Porg instead. Groot can grow back, the user argued. Turns out, that’s not really the case.

It’s actually not the first time Gunn has clarified that the adorable Baby Groot who grew from the OG Groot’s kindling isn’t the same character fans loved in the first Guardians. In a Facebook Live chat in April of last year, Gunn explained that it’s “not the same Groot.” He was even more explicit that the first Groot had passed after Vol. 2 hit theaters.

Groot’s “death” is actually somewhat of a rarity for the MCU, which almost never kills off its heroes. Sure, Quicksilver died, but he hardly counted, and Agent Coulson came back on the TV show. Groot, the one we first knew, is dead. Groot was also a dad, which is frankly the new and much more shocking bit of information.

Thinking of Baby Groot as Groot 2.0 instead of Groot Jr. raised fewer questions, but now you know the sad truth.