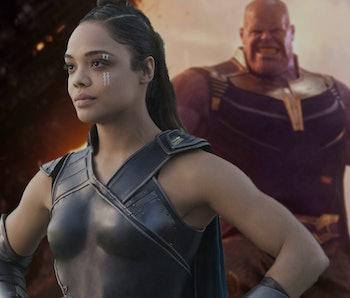 Avengers: Infinity War featured appearances by almost every character in the Marvel Cinematic Universe, so fans were a little concerned about what happened to the heroes who didn’t show up, especially given how high the body count was in Infinity War. Valkyrie, a new, fan-favorite character who recently made her debut in Thor: Ragnarok, was MIA, leading fans to wonder if she survived. Joe Russo, one of the film’s directors, cleared things up.

Infinity War opens with Thanos and his goons having already destroyed the refugee ship that Thor, Valkyrie, Loki, the Hulk, and the surviving Asgardians escaped on at the end of Ragnarok. Thanos kills Loki and Heimdall and defeats the Hulk in a brawl, but Valkyrie is nowhere to be seen. Was she killed off-screen? The film doesn’t explain, and the only hope for her survival comes from a line much later when Thor mentions that Thanos killed “half” of the Asgardians. Whether or not Valkyrie is part of that half isn’t specified.

Russo was in Iowa City on Monday for a series of talks and lectures in the town where his alma mater, the University of Iowa, is located. According to a redditor, the director stopped by a high school for a Q&A session. Russo confirmed that Valkyrie survived Thanos’s attack, and that some of the Asgardians were able to flee in escape pods. However, he wasn’t willing to divulge if Korg, the delightful rock alien voiced by Ragnarok director Taika Waititi, made it or not.

Russos clean-cut answer solves one mystery, and gives fans hope that we might see Valkyrie again in a future movie in the MCU. Tessa Thompson, who plays the character, wasn’t quite as helpful.

“They are at the bar …?” she tweeted when one of her followers asked where she and Hawkeye were in Infinity War, and later made a joke about a popular Twitter account which compares photos of her to goats. (It’s wonderful, the internet is a strange place.)

Elsewhere in the Q&A, Russo seemed to confirm that Doctor Strange gave Thanos the Time Stone because it was the only way to ensure their eventual victory, and he revealed that Tom Holland improvised Spider-Man’s tear-jerking death scene. Wowzers.