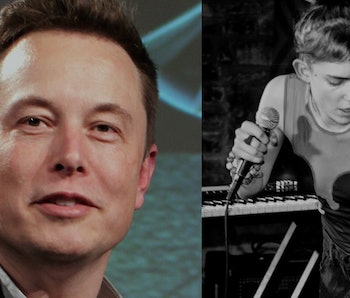 Elon Musk and synth pop artist Grimes, united over bad jokes about A.I., appeared together on Monday night at the Met Gala in New York City, and amongst the very good tweets were variations on a meme around the bizarre cultural moment that saw Musk and Grimes together in New York.

Here is how the internet reacted to this weird moment.

Another user gave an interesting analogy on how to describe the new couple.

This user explained the love story between Musk and Grimes in just four panels.

A Twitter user gave an example of a conversation between Musk and Grimes based on a news headline.

Finally, one user threw in some choice comments made by what appears to be singer Demi Lovato regarding the new couple.

More like this
Innovation
Jan. 25, 2023
Starship orbital flight: SpaceX successfully loaded the rocket with over 10 million pounds of propellant
By Mike Brown and Molly Glick
Culture
Feb. 7, 2023
Lost Never Solved Its Weirdest Sci-Fi Mystery, But This Episode Came Close
By Jake Kleinman
Culture
Feb. 4, 2023
The End of the Cold War Could Have Killed James Bond. Instead, it Made Him Stronger.
By David Grossman
LEARN SOMETHING NEW EVERY DAY.
Related Tags
Share: