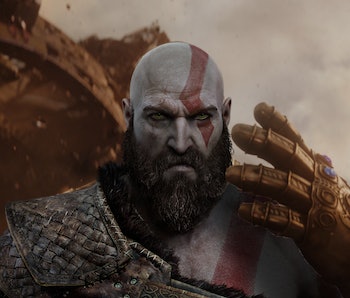 The new God of War video game has an awesome Avengers: Infinity War Easter egg that’s too uncannily precise to be an accident, and it sort of spoils the fact that Thanos completes his Infinity Gauntlet by the end of the movie.

On Monday, redditor moxxxxxi posted on the God of War subreddit about and Infinity War reference in the game involves an in-game magical weapon that allows Kratos to wield an Infinity Gauntlet similar to Thanos’s, blasting magical energy at his enemies. The equipable in-game Talisman called “Shattered Gauntlet of Ages,” when fully leveled-up and imbued with three of 6 possible Infinity Stone-themed Enchantments, allows Kratos to fight like Thanos by shooting out purple energy beams.

To find the Shattered Gauntlet of Ages in God of War, you simply have to defeat a Traveler in the Northri Stronghold, and it should drop the Talisman. Then you just have to level it up all the way and put the Infinity Stones — or “Enchantments” — into the gauntlet.

Here’s the fully-powered Gauntlet in action:

The official in-game description for the Gauntlet also sounds like the origin story for the Infinity Stones:

“An ancient relic of Hel deemed too powerful to remain whole, fragments of its former strength lie scattered throughout the realms…”

What’s more is that the six possible items you can use as Enchantments on the Gauntlet correspond perfectly to the six Infinity Stones:

In God of War, Talismans are items you can equip in addition to weapons and armor to grant different bonus abilities to use in combat. And Enchantments can be used to infuse weapons, armor, and Talismans with even more power. So basically, after Kratos finds a powerful gauntlet and acquires enough magical stones to fill it up, he gets super-powerful. Not powerful enough to murder half the residents of the God of War universe, but it’s still a fun reference.

If you’re a Marvel fan looking for references in God of War, there’s a ton of overlap mainly because God of War takes place in a Nordic environment. There’s a Talisman called “Horn of Heimdall,” which feels like a weird fusion of Easter eggs considering actor Idris Elba plays Heimdall in the MCU and Roland Deschain in The Dark Tower, a story where his horn is very important. There are also Valkyrie and Dark Elf enemies in the game, which you could see as Thor: Ragnarok and Thor: The Dark World references. But the more obvious explanation is that both Asgard in the Marvel Universe and the land presented in God of War are based on Nordic legends and myths.

So would Kratos agree with Thanos’s extremist philosophy about annihilating half the universe to save the other half? Probably.

Both Avengers: Infinity War and God of War are out now.