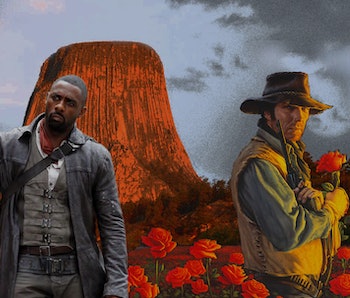 Gunslinger Roland Deschain’s eternal struggle against the Man in Black in Stephen King’s The Dark Tower book series just got a little bit longer: the upcoming film actually takes place after the events of the books.

On Monday, in an interview with IGN, director Nik Arcel said that The Dark Tower film “is a canon continuation” of the novels. “That’s exactly what we intended and what Stephen King has signed off on.” If that’s the case, then there’s little reason for budding fans to embark on the journey of reading the books.

After a long series of eight books in which Roland neglects and sacrifices a number of companions along the way — including young Jake Chambers by the end of The Gunslinger — Roland finally achieves his goal of reaching the top-most chamber of the Tower to rage against God or do whatever it is that angry Gunslingers do.

Rather than some epic confrontation, Roland is simply shoved through a mystical doorway by unseen forces back in time to the start of his journey with his memories quickly fading. The cycle is his punishment, and he’s doomed to repeat the journey over and over.

The key difference, however, is that in the next iteration of his journey, Roland picks up the Horn of Eld, a family heirloom, rather than neglect it at the Battle of Jericho. With it in hand, Roland can end the cycle for good.

Shortly after production began on The Dark Tower, Stephen King tweeted the above image, which is utter nonsense to anybody who doesn’t know anything about the books. Roland’s journey in the film version will be the “last time around” because with the Horn in his possession, Roland can end the timeless cycle of punishment he’s endured for who knows how long.

Roland’s neglect of the Horn is a reflection of his ruthlessness and lack of compassion throughout the series; his journey towards redemption begins with the Horn in hand.

In a sense, The Dark Tower film looks to undo everything from the books, so unless ambitious readers want to read the series in its entirety, there is no need to read The Gunslinger — it will only result in confusion. New fans will easily be able to hop into the film version of The Dark Tower without any previous knowledge, because it’s both a loose adaptation of the original book and a continuation of the series at large.

Even zealous fans of the books will have no idea what to expect from Idris Elba’s version of Roland Deschain and his battle against Matthew McConaughey’s Man in Black.

More like this
Entertainment
Jan. 30, 2023
The Boogeyman Trailer Delivers a New Take on Stephen King's Monster Under the Bed
By Dais Johnston
Culture
Jan. 25, 2023
David Cronenberg made the best Stephen King adaptation you probably haven’t seen
By Jon O'Brien
Entertainment
Feb. 1, 2023
James Gunn's DCU Will Have Close Ties to This Year's DCEU Movies
By Eric Francisco
LEARN SOMETHING NEW EVERY DAY.
Share: