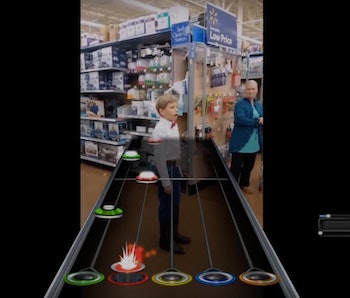 In an amusing example of the internet coming full circle, “Lovesick Blues” by Mason Ramsey, the cherubic 11-year-old also known as the Yodeling Walmart Kid, can now be played on Guitar Hero.

The DIY meme-to-Guitar Hero track was created by 19-year-old Zach Syrylo of Scranton, Pennsylvania, whose YouTube page also hosts incredible pop mashups, like Kesha mixed with Slipknot. When it comes to making a Guitar Hero track out of a meme, Syrylo tells Inverse it’s a worthy stage in meme evolution. “I think they make for fascinating contributions to internet and meme culture,” he says. “I figured since the yodeling kid meme has a musical focus, it’d be a good and easy fit for a joke about Guitar Hero.”

On April 7, Guitar Hero YouTuber Acai debuted a video of himself playing the track. The post has since garnered over 155,000 views. Acai — real name Alec Castillo — has a pretty impressive following on YouTube for his versions of Guitar Hero tunes, which he also plays on Twitch. He also has a really great laugh.

The “Lovesick Blues” mod is based on the Guitar Hero game Guitar Hero: Warriors of Rock, which came out in 2010. For anyone interested in playing along, the download code to the track can be found here, on Syrylo’s original post of the song.

Making the track sounds like no easy task. “Considering that the track is originally just a kid singing and tapping his foot, it was pretty difficult to properly “tempomap” “Lovesick Blues,” (aligning the beats per minute of the audio to a guitar hero highway),” he says. “Besides that, I had experience from making previous custom songs for the game. To take it a step further, I tried to isolate Mason’s voice from any ambient noise in the video, and split them into separate audio tracks, so his voice would go silent whenever you miss a note in-game.”

Since a video of Mason Ramsey crooning Hank Williams in an Illinois Walmart made it onto YouTube in late March, the Golconda native has gone viral and beyond. The endearing performance has led Ramsey to two appearances on The Ellen DeGeneres Show, a performance at the Grand Ole Opry in Nashville, and a surprise appearance at Coachella. On Friday, news broke that Ramsey had signed a record deal with Atlantic Records and released his first single, “Famous.”

Considering it’s actually kind of good, maybe it will get a Guitar Hero track next. “I’ll have to see what I can do,” Syrylo says.

More like this
Culture
Sep. 15, 2022
The cults that survive even when the prophecy fails
By Peter Ward
Gaming
Sep. 15, 2022
You need to play the best music game since Guitar Hero ASAP
By Joseph Yaden
Culture
18 hours ago
8 stellar sci-fi movies leaving HBO Max in September 2022
By Robin Bea
Related Tags
Share: