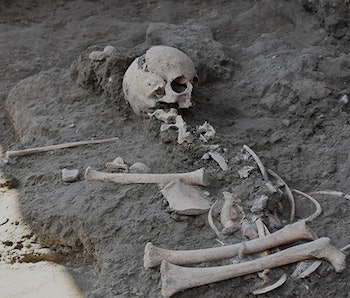 As the 100,000 evacuees of 2017’s Mount Agung eruption in Bali can attest, scientists have done a pretty good job of figuring out how to predict when a volcano will blow. Humans could have used this knowledge in 79 CE, when the ancient city of Pompeii and some 2,000 inhabitants were obliterated by the great eruption of Mount Vesuvius. A newly unearthed victim, reported archaeologists at the site on Thursday, provides a glimpse into the terror of this tragedy.

Researchers at the Applied Research Laboratory of the Pompeii Archaeological Park announced in a statement that they’d discovered the skeleton of a child, aged seven or eight, in the central bathhouse of the ancient city. This child was not able to escape when he or she had the chance. Vesuvius first began erupting on August 22 in the year 79 CE, spitting up hot ash, pumice, and volcanic gases that settled slowly enough on the city that many people still had time to flee. Not everyone did, however, and when the next day the second, far larger eruption spewed forth pyroclastic flows — the hot lava, dust, and gas surges commonly associated with volcanoes — it swallowed everything in its path. This child, the researchers hypothesize, ran for cover in the central bathhouse — but was instead trapped there for centuries.

The child appears to be alone in this part of the site, suggesting a lonely death. Having first set out to simply clean out the entryway to the bathhouse, which had already been excavated in the year 800 and again in 1877 and 1878, the archaeologists initially noticed the small skull about 4 inches below the floor. Next came the bones, producing the first full skeleton discovered in Pompeii in over 20 years.

What’s unusual about this skeleton, the researchers write, is that it wasn’t buried in volcanic lapillus — tiny stones — and a layer of ash, like most corpses that have been found at Pompeii. Instead, this body was swallowed up directly by the pyroclastic flows. The researchers hypothesize that this peculiar situation came about because the lapillus couldn’t get through the roof of the bathhouse, but the rapid pyroclastic flows burst through the building’s window, enveloping the child.

In a statement released Thursday, Massimo Osanna, Director of the Archaeological Park of Pompeii, said that the emotionally charged “exceptional discoveries” as well as the culture of scientific cross-disciplinary collaboration of the park put Pompeii at a “turning point for archaeological research.”

Archaeologists, architects, restorers, engineers, geotechnicals, archaeobotanists, anthropologists, and vulcanologists make up the staff that work on the ancient site, where after over 1,900 years of excavating, we’re still unearthing new tragedies.

More like this
Science
Jan. 28, 2023
ChatGPT could help students cheat — but it could also revolutionize education
By The Conversation and Sam Illingworth
Science
Jan. 28, 2023
The best mystery thriller on Netflix ignores a basic fact about hydrogen energy
By Tara Yarlagadda
Science
18 hours ago
Viruses can speed up atypical brain aging — vaccines may offer peace of mind
By Andrew Bubak, Diego Restrepo, Maria Nagel and The Conversation
LEARN SOMETHING NEW EVERY DAY.
Share: