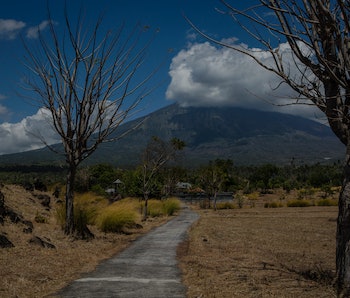 The latest news in Indonesia that one of its volcanoes is spewing magma and ash miles into the sky is unfortunately nothing new to the island country. Mount Agung, the highest peak on Indonesia’s vacation island of Bali, is just the most recent threat of volcanic eruption in a country who has lost more people due to volcanoes than any other coutnry, at more than 150,000 deaths.

Mount Agung in Bali is just one of 78 active volcanoes in Indonesia — the most of any country — which have altogether erupted 1,250 times, a number only second to Japan, the Smithsonian Institution says. The reason that Indonesia experiences so many eruptions compared with say, the United States, is due to where the country sits on the edge of the Pacific Ocean.

The “Ring of Fire”

Many know this volatile area as the “Ring of Fire,” which is a string of volcanoes near the Pacific that see unusually high amount of seismic activity. This area accounts for 75 percent of the world’s active volcanoes, and 90 percent of all earthquakes, according to National Geographic.

This volatility in the “ring” is due to the amount of activity happening below it between tectonic plates in the earth’s crust. These plates collide enough with each other to transform the earth’s dense molten rock into magma, which then builds up enough to put pressure on the earth’s surface, causing it to form volcanoes that erupt.

Indonesia is unique in that it lies in between numerous sets of tectonic plates, and also sits near the world’s second most active volcanic region, the Alpide belt, whose chain of mountains include those in the Alps, Pyrenees, and across southeast Asia. The country’s 13,466 islands spread tens of thousands of miles wide, and make it the largest island country in the world, according to the CIA.

Indonesia has evacuated more than 75,000 people from Bali in preparation for Mount Agung’s eruption, which experts were able to predict in December. Authorities have cleared an area around the mountain spanning five miles that could be hit with smoke, magma and ash. The mountain last erupted in 1963, when it killed more than 1,500 people.