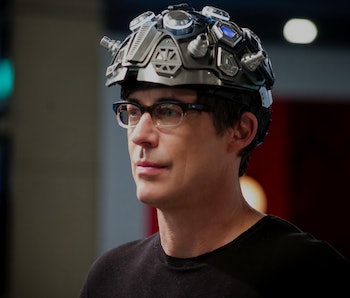 At the end of last week’s episode of The Flash, Dr. Harrison Wells’s (Tom Cavanagh) intelligence started degrading after wearing his version of the The Thinker’s (Neil Sandilands) Thinking Cap. What makes the cap so dangerous is the fact that it’s powered by one of the universe’s most mysterious components — dark matter. Unfortunately, while the idea of an intellect-expanding device powered by a real but little-understood universal force sounds enticing, it’s also pretty dang implausible.

Dark matter is neither a substance like gasoline, nor is it a form of energy that humans have learned how to harness, like electricity. We can’t see it or touch it. In fact, scientists have only observed dark matter indirectly, through its gravitational effects on stars. One of its defining characteristics is that it doesn’t emit either light or energy — that’s why we can’t observe it — making it an especially unlikely choice of fuel for a thinking cap.

We think it exists, however, because astrophysicists suspect that there is some unknown component in the universe that explains how galaxies retain their shape. According to the existing law of physics, the super-high speeds at which galaxies spin should theoretically make them fly apart. But they don’t. This has led astrophysicists to believe that there must be an invisible substance exerting a gravitational force on galaxies, holding them together.

In the ongoing storyline of Harry Wells, who’s already a certified genius, he uses dark matter to try to keep pace with The Thinker, but this makes his body deteriorate over time. In this week’s episode, “Fury Rogue,” we see that Wells’s efforts to improve his intelligence to match wits with The Thinker are actually frying his brain, and his intelligence is now deteriorating. As we all know by now, dark matter isn’t a viable source of energy for a device like the Thinking Cap.

While the conjectures about dark matter on the Flash have no basis in reality, there are real areas of research in which scientists seek to overcome the limitations of people’s brains. Transcranial magnetic stimulation involves altering a person’s brainwaves by emitting electromagnetic radiation that can pass through the skull and into the brain. While it’s in relatively early phases of research, it has shown the potential to ease symptoms of schizophrenia and even change people’s musical tastes.

Despite this early promise, though, some researchers remain highly skeptical of transcranial magnetic stimulation, as some research findings can be difficult to reproduce in the lab, and in some cases, have even been beefed up to make them seem more significant than they really are.

Obviously, The Flash is a work of fiction, so we’re not going to give it too hard of a time here, but suffice it to say that Dr. Harry Wells’s Thinking Cap is more of a work of fantasy than science fiction.