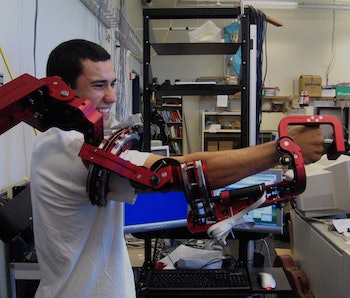 Cyborgs may soon be more common than you ever expected. It sounds like science fiction, but visionary researchers are working to overcome the technical obstacles involved with helping people live better lives through technologies that interact with the human body.

At the forefront of this effort are Manuel Casanova, Mikhail Lebedev, and Ioan Opris. These three researchers served as the editors of a collection of research that recently won the new Frontiers Spotlight Award.

This collection, titled “Augmentation of Brain Function: Facts, Fiction and Controversy,” consists of 149 scientific articles on brain augmentation and neurological prosthetic devices published by more than 600 authors. The award will help fund a conference in 2018 where these researchers will share their findings.

Just to be clear, when we talk about brain augmentation and neural technologies, we’re not talking about mind-control. We’re also not talking about Motoko Kusanagi — a living brain inside a robotic body — so much as we’re talking about Luke Skywalker — a mostly intact human living with a robotic hand. And with advances in brain-controlled prosthetics, Luke’s hand could be quite real within the next 30 years. So could technologies that allow people with brain-affecting disorders to live more capably.

Lebedev, a research scientist at Duke University, works with monkeys to develop prosthetic devices that can be controlled by a user’s brain. He explains that this extraordinary feat is simple, at least in principle.

“The idea is that you record from a brain area, you decode brain activity, and then you connect the brain of a monkey to an external device,” Lebedev tells Inverse. “Your monkey can control an artificial arm or a neuroprosthetic for locomotion, and also can send sensory information back to the brain using electrical stimulation.”

So not only is he working to develop prosthetic devices that can be moved with one’s mind, they could possibly even transmit sensory information back to the user’s brain. This would be crucial to developing useful neuroprosthetics, since it can be nearly impossible to accurately grasp or manipulate objects without being able to feel what’s happening.

The major obstacle to this becoming a reality is that neural interfaces aren’t sufficiently advanced. Lebedev points to the cochlear implant as a strong example of a neuroprosthetic that already exists, and explains that its success lies partly in the fact that it doesn’t rely on decoding a huge number of brain signals. To make brain-controlled devices like external prosthetic limbs or exoskeletons work, scientists will need to develop better ways to decode all of the signals used by the human brain to control limbs.

Lebedev is hopeful, though, that in the coming decades scientists will develop neuroprosthetics that don’t just bring users back up to a typical level of functioning, but allow them to exceed it.

“If you want to move your arm it takes 100 milliseconds,” he says. “But if you connect a mechanical device that reacts instantaneously, you’ve got a 100 milliseconds advantage which may be critical in some situations.”

And while quick reaction times would help patients with prosthetics avoid falls or accidents, this also opens new doors to enhancing human performance in ways we can only imagine.

Casanova, a neurotherapeutics researcher at the University of South Carolina School of Medicine, also sees his research serving this dual purpose: helping people with disabilities live without debilitating difficulties and pushing the limits of human performance. He does this through transcranial magnetic stimulation (TMS), which he uses to help patients with autism and schizophrenia deal with the sensory processing difficulties associated with those conditions.

“Autistic individuals have a particular cognitive style where they pay attention to particulars at expense of the generalities,” Casanova tells Inverse. This means that a person with autism spectrum disorder (ASD) may focus on a friend’s nose during a conversation but not be able to tell what emotion the friend’s face is conveying. The reason for this, at least in part, is that the brainwaves of a person with ASD are operating at a lower frequency than those of a neurotypical person. So while an autistic individual may have an exceptional eye for details on a small scale, something about their brainwave frequency is keeping different brain areas from effectively communicating.

But with TMS, electromagnetic waves from an external source can help a person’s brainwaves reach the frequency at which they might operate more effectively. Casanova likens it to placing two tuning forks next to each other. If one is vibrating at a certain frequency, soon the other will do the same. This is called resonance, and it’s the same principle behind TMS. In this way, Casanova hopes to help alleviate sensory processing difficulties, one of the more handicapping symptoms of ASD.

He sees no reason to stop at helping people function at a typical level, though. In the coming decades, Casanova imagines that pilots will be able to wear a helmet with TMS coils that will allow them to fly for 16 hours at a time without losing their edge.

“You wouldn’t have as many accidents, I can assure you,” he says.

One of the main obstacles to this type of research, Casanova explains, is government funding. Since brain augmentation is not as much of a priority for the federal government as such hot topics as molecular genetics and precision medicine, he says it’s hard for this research to receive the funding it needs to advance. But he hopes increased public awareness of the benefits it could yield will help change that.

More like this
Innovation
Sep. 21, 2022
Gaming tech could ease pain during surgery — here’s how
By Sofia Quaglia
Innovation
Sep. 29, 2022
Scientists have created a mechanical womb that can grow life in the lab
By Miriam Fauzia
Innovation
Sep. 28, 2022
Look: This tiny robot could change medicine forever
By Katie MacBride
Related Tags
Share: