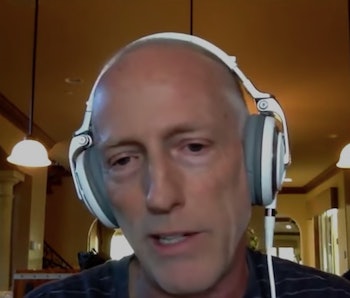 In the Twitter universe, few exude cultural gravity like Kanye West. Over the past eight days since he returned to the site, Kanye has pulled attention in his direction like a social media black hole, gobbling up and spaghetifying bloggers unfortunate enough to stray too close to his feed. In the past week alone, Kanye has: posted a litany of zen koan-like tweets that he says are part of his new self-published book; prompted a strong backlash for saying he likes the way anti-Black Lives Matter pundit Candace Owens thinks; and shilled for Elon Musk’s Tesla.

On Monday morning, things took a turn for the even stranger, as Kanye shared a series of short videos featuring Dilbert creator turned political pontificator Scott Adams. In the clips, which you can watch as one uninterrupted video on Adams’ Twitter feed, the cartoonist praises Kanye for helping to break people out of “mental prisons.”

Mental prisons, per Adams, are persistent, incorrect beliefs that blind people to the truth. “One [mental prison] is the false belief that history repeats,” Adams said, leaning in close to the camera and shaking his head. “It doesn’t, it never does, it just looks like it.”

Adams argues that Kanye’s affirmation of Owens is a watershed moment signaling that we are approaching the “Golden Age,” which Adams loosely defines as the time where important things are going well. Adams says he first saw signs of the impending Golden Age in the political ascension of President Donald Trump.

For people familiar with Adams work and worldview, this isn’t particularly surprising. Adams was one of few who predicted Trump’s victory long before the 2016 presidential election. Last October, Adams published Win Bigly: Persuasion in a World Where Facts Don’t Matter, a book about President Trump’s credentials as a “master persuader.”

In his book and various podcast appearances and blog posts, Adams gives a defense of Trump’s seeming inability to tell the truth that is essentially, “Who cares?” Adams argues that Trump’s various shortcomings and indiscretions are irrelevant to his ability to be a good president. The concepts of truth and lies don’t enter into Adam’s calculus — you’re a master persuader if you’re good at persuading, by any means necessary.

Above all, Adams seems to regard anything that shakes up the status quo as a victory. That’s why he was so bullish on a Trump presidency, and why he’s heaped praise on Kanye for affirming Owens.

“Seven words, and [Kanye] ripped a hole in reality,” Adams said. And then Kanye closed the feedback loop.