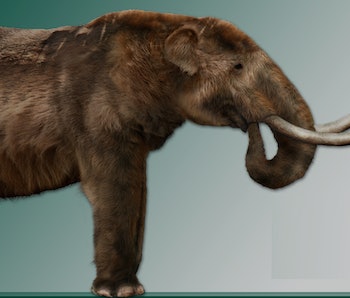 Humans are physically small, but as the effects of climate change make abundantly clear, we have an outsized impact on the Earth. These very obvious effects of human influence began just a couple hundred years ago with the Industrial Revolution, but new research in the journal Science suggests that our profound impact on the natural world isn’t a recent phenomenon. In the paper, a team of scientists argue that humans whittled down the average size of mammals all over the world.

The paper, published on Friday, shows that the largest mammals on Earth began to go extinct when humans arrived on the scene, slowly but surely driving down the average size of mammals on earth from 200 pounds to 15 pounds. The study’s authors, led by Felisa Smith, Ph.D., a professor of biology at the University of New Mexico, argue that the loss of the largest land mammals on Earth also contributed to reshaping the environment because these larger animals filled important ecological niches that they left empty when they went extinct.

To conduct this study, Smith and her colleagues analyzed mammal fossils from five different periods over the 65 million years of mammal history, with each period corresponding to a different level of human expansion around the world. They found a clear correlation between the growing numbers and extent of human populations and the shrinking average size of large land mammals.

The team suspects that human preferences for hunting larger animals contributed to the steady decline and extinction of large prehistoric animals like the giant sloth, the mastodon, the woolly mammoth, and the short-faced bear. The reasoning for this preference, they suggest, is that it’s more efficient to hunt one large animal than a bunch of smaller animals. And while these larger mammals had gotten along quite well before humans entered the picture, the arrival of Homo sapiens spelled their demise.

“Taken as a whole, over 65 million years, being large did not increase mammals’ extinction risk. But it did when humans were involved,” Smith told NPR on Thursday.

It wasn’t just human hunting that drove the extinction of bigger animals, though. Humans have a long history of modifying the natural environment in ways that degrade it for other animals, for example burning forests or grasslands to grow crops or flush out prey. In the process of doing these short-term activities, humans made habitats unsuitable for the large mammals that once called them home.

Once the large mammals were gone, so were their ecological functions, totally recalibrating the way that energy flowed through the food chain.

In addition to destroying these mammals’ habitats, humans also competed with them for prey — and ultimately out-competed them. By employing weapons and domesticated dogs to increase the success of hunts, humans exploited the smaller mammals that predators like the saber-tooth cat usually ate, pressuring these predators toward extinction even when the humans didn’t directly hunt them.

This pattern hasn’t ended, write the study’s authors. Even though some large mammals still exist, especially in Africa, their numbers are on the decline, and the researchers predict that they will continue to do so.

“Thus, the largest mammal on earth in a few hundred years may well be a domestic cow,” they write.

Abstract: Since the late Pleistocene, large-bodied mammals have been extirpated from much of Earth. Although all habitable continents once harbored giant mammals, the few remaining species are largely confined to Africa. This decline is coincident with the global expansion of hominins over the late Quaternary. Here, we quantify mammalian extinction selectivity, continental body size distributions, and taxonomic diversity over five time periods spanning the past 125,000 years and stretching approximately 200 years into the future. We demonstrate that size-selective extinction was already under way in the oldest interval and occurred on all continents, within all trophic modes, and across all time intervals. Moreover, the degree of selectivity was unprecedented in 65 million years of mammalian evolution. The distinctive selectivity signature implicates hominin activity as a primary driver of taxonomic losses and ecosystem homogenization. Because megafauna have a disproportionate influence on ecosystem structure and function, past and present body size downgrading is reshaping Earth’s biosphere.

More like this
Science
6.22.2022 8:26 PM
Yes, there are mites living on your face — and they can poop, a new study finds
By Allison Parshall
Science
6.28.2022 4:52 PM
1.8 billion people face once-in-a-century flooding, study reveals
By Tara Yarlagadda
Science
6.24.2022 1:30 PM
The best post-apocalypse movie of the century reveals a dark debate over humanity’s future
By Tara Yarlagadda
Related Tags
Share: