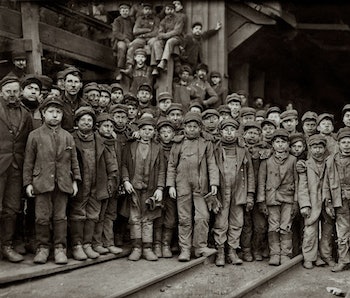 The Industrial Revolution shaped the modern world, and coal was the fuel that powered it — but at a steep cost.

Coal mining’s economic and environmental impacts are well-documented (and debated), but a new study argues that it also leaves long-lasting psychological scars.

Published in the Journal of Personality and Social Psychology in November, the research draws from nearly 400,000 personality tests taken in the United Kingdom.

It found that modern-day residents of what were historically industrial hubs of the UK are more disposed to negative emotions like anxiety, more impulsive, and more likely to report lower life satisfaction. The study found that conscientiousness was 26 percent lower, while neuroticism was, on average, 33 percent higher when compared to the rest of the country.

Based on the “big five” personality model, lower conscientiousness translates to more disorderly and less goal-oriented behaviors, while neuroticism is associated with emotional instability and a higher risk of depression and substance abuse.

Michael Stuetzer, one of the study’s co-authors, explains, “The decline of coal in areas dependent on such industries has caused persistent economic hardship – most prominently high unemployment.”

The high poverty then combined with two other factors, migration and learned behaviors, to pass down these negative personality traits.

Migrants into industrial areas came in search of more opportunity. They had already experienced what the researchers called “psychological adversity” in the worlds that they had left behind. In their new industrial environments, they faced harsh working, living, and sanitary conditions that increased their stress and decreased their sense of well-being.

Migrants leaving the coal-reliant regions, on the other hand, tended to be those with greater optimism and resilience.

This selective in- and out- migration may have concentrated the “negative” personality traits among the populations that stayed, the researchers posit.

While the study was limited to the UK, it did include North American responses as part of a “robustness check”, finding similar patterns of “post-industrial personality traits” on this side of the pond as well.

While psychological impact is much harder to measure than environmental and economic ones, this study contributes an important dimension in considering the pro’s and con’s of coal.

Recent research has identified regional variation of personality traits within countries but we know little about the underlying drivers of this variation. We propose that the Industrial Revolution, as a key era in the history of industrialized nations, has led to a persistent clustering of well-being outcomes and personality traits associated with psychological adversity via processes of selective migration and socialization. Analyzing data from England and Wales, we examine relationships between the historical employment share in large-scale coal-based industries (coal mining and steam-powered manufacturing industries that used this coal as fuel for their steam engines) and today’s regional variation in personality and well-being. Even after controlling for possible historical confounds (historical energy supply, education, wealth, geology, climate, population density), we find that the historical local dominance of large-scale coal-based industries predicts today’s markers of psychological adversity (lower Conscientiousness [and order facet scores], higher Neuroticism [and anxiety and depression facet scores], lower activity [an Extraversion facet], and lower life satisfaction and life expectancy). An instrumental variable analysis, using the historical location of coalfields, supports the causal assumption behind these effects (with the exception of life satisfaction). Further analyses focusing on mechanisms hint at the roles of selective migration and persisting economic hardship. Finally, a robustness check in the U.S. replicates the effect of the historical concentration of large-scale industries on today’s levels of psychological adversity. Taken together, the results show how today’s regional patterns of personality and well-being (which shape the future trajectories of these regions) may have their roots in major societal changes underway decades or centuries earlier. (PsycINFO Database Record.