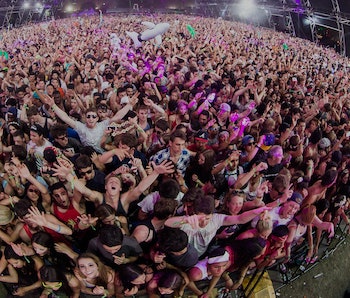 As anyone who made the annual pilgrimage to the 2018 Coachella Valley Music and Arts Festival knows, there’s a singular quality to watching a musical performance live with hundreds or thousands of other people. Whether it’s Beyoncé or, uhh, the Yodeling Wal-Mart kid, a live concert is a unifying experience. And not just spiritually: Neuroscientists reported in March that listening to music in a crowd links you to people in more ways than one.

In a conference paper presented in March at the annual meeting of the Cognitive Neuroscience Society in Boston, a team of researchers chaired by neuroscientist Jessica Grahn, Ph.D. of the University of Western Ontario showed how people viewing a concert together exhibited a remarkable degree of brainwave synchronization while viewing a live musical performance in a large group. “Music is typically linked with ritual and in most cultures is associated with dance,” Grahn told Science News in March. “It’s a way to have social participation.”

In the study, the researchers collected electroencephalography (EEG) data from three groups of 20 volunteers split into three different settings: watching a live concert among a large audience (more than 80 people), watching a video of the concert with a large audience, and watching a video of the concert in groups of just two people. They found a big difference among the conditions. The people who viewed a live performance in a large group showed a much higher degree of brainwave synchronization than the participants in either of the other two groups.

“I was extremely excited to see that across the live audience, brain rhythms were synchronized in exactly the frequency range that corresponds to the ‘beat’ of the music, so it looks as if the beat is driving audience brain rhythms,” Molly Henry, Ph.D., a postdoctoral researcher in Grahn’s lab and the first author on the study, said in a statement. “That may seem common sense, but it’s really something. These are novel findings in the context of live music listening that are providing insights into the more social side of music listening.”

That being said, anyone who witnessed Beyoncé’s or Mason Ramsey’s performance over the weekend knows that there’s something unique about enjoying a concert among thousands of friends. Now we’ll just see if neuroscientists can ever fully explain you brain on Coachella.

More like this
Science
8.6.2022 11:00 PM
Senior dogs could help us understand an incurable brain condition
By Lesley Evans Ogden and Knowable Magazine
Innovation
8.5.2022 11:00 AM
Alexa could diagnose Alzheimer’s and other brain conditions — should it?
By Joanna Thompson
Innovation
19 hours ago
“Quantum materials” could give the human brain a run for its money, scientists say
By Nathaniel Scharping
Related Tags
Share: