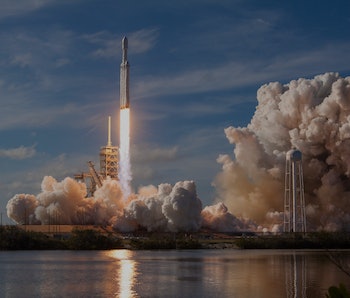 It’s a busy day for SpaceX, as the company’s latest Falcon 9 launch sees both a major upgrade for the network of Iridium Communications satellites and the latest attempt to recover the rocket’s fairing. And we can officially count among Friday’s SpaceX observers at least one teen gun control activist.

David Hogg, one of the high school students thrust into the national spotlight in the aftermath of the shooting at Marjory Stoneman Douglas High School in Parkland, Florida, tweeted in response to SpaceX founder Elon Musk that he “can’t wait” for SpaceX’s fairing recovery attempt. When asked about his interest in space, Hogg revealed he was one of the many captivated by February’s first ever launch of the Falcon Heavy rocket.

“Yes I saw FH lift off and the two boosters land,” he tweeted. “I was so overwhelmed I nearly cried.”

He added that he believed what Musk is doing “could save humanity,” presumably referring to the SpaceX founder’s much-discussed plans to establish a settlement on Mars and provide a safeguard against global catastrophe.

“If any of you are aerospace engineers you rock,” he said in another reply. “What you guys do is amazing.”

While it’s understandable that Hogg’s wider hobbies haven’t garnered as much attention as his activism, he revealed that his love of space actually brought him and Never Again MSD cofounder Emma González together.

“Emma and I are total space nerds,” he said. “We really became friends through [teacher] Kyle Jeter’s Astronomy club at our school.”

More like this
Innovation
Jan. 25, 2023
Starship orbital flight: SpaceX successfully loaded the rocket with over 10 million pounds of propellant
By Mike Brown and Molly Glick
Culture
16 hours ago
Lost Never Solved Its Weirdest Sci-Fi Mystery, But This Episode Came Close
By Jake Kleinman
Culture
Feb. 4, 2023
The End of the Cold War Could Have Killed James Bond. Instead, it Made Him Stronger.
By David Grossman
LEARN SOMETHING NEW EVERY DAY.
Related Tags
Share: