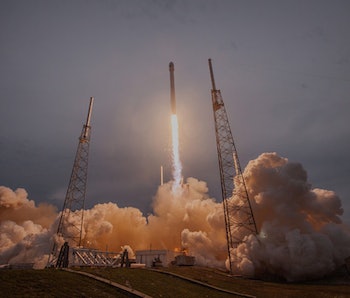 SpaceX is set for liftoff. Elon Musk’s space-faring venture will launch a Falcon 9 reusable rocket from Vandenberg Air Force Base on Friday morning, carrying 10 Iridium Communications satellites as part of what it describes as one of the largest tech upgrades in history. Originally scheduled for Thursday, the launch was pushed back after an issue with one of the satellites. A livestream will capture the action as it develops.

This is the fifth Iridium mission, part of the company’s goal to bring mobile voice and data coverage to all over the world as part of the world’s largest commercial satellite network of 75 low-Earth orbit satellites. The launch is part of a big push for SpaceX, which will be the sixth of a planned 30 launches this year alone, nearly doubling the 18 from last year. Faster turnaround times and reused rockets means greater revenue for more ambitious projects like the manned mission to Mars in 2024. Friday’s mission is set for liftoff from Space Launch Complex 4E at 7:13 a.m. Pacific time, with a backup launch opportunity scheduled for Saturday at 7:08 Pacific time. SpaceX will livestream the event from its YouTube page:

For Friday’s mission, SpaceX will be reusing the first stage booster from the third Iridium mission on October 9, 2017, when it successfully landed the rocket on droneship Just Read the Instructions in the Pacific ocean before sunrise. Unfortunately, SpaceX won’t be repeating the feat for this mission as it has no plans to re-land the first stage booster.

Once this mission is complete, Iridium will have 50 of its satellites in position. The next launch, scheduled for May 10, will put five more into orbit as part of a ridesharing mission with two Gravity Recovery and Climate Experiment Follow-On satellites, a joint venture between the National Aeronautics and Space Administration and the German Aerospace Center.

SpaceX’s efforts to reuse Falcon 9 rockets offer huge cost savings, with each rocket costing around $62 million and re-fueling only costing around $300,000. These savings will help fund the “BFR” rocket, announced in September 2017, that will enable a cargo mission to Mars in 2022 followed by a crewed mission two years later.

SpaceX is assisting one of the largest tech upgrades ever, but it’s small compared to what’s around the corner.