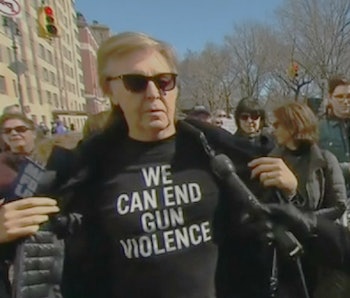 Sir Paul McCartney joined tens of thousands of people who gathered in New York City for the March For Our Lives protest on Saturday. While an estimated 500,000 people joined the central march in Washington, D.C., McCartney opted to march in the city where he lost his friend and Beatles bandmate, John Lennon.

“One of my best friends was killed by gun violence right around here, so it’s important to me not just to march today but to take action tomorrow and to have these people have their voices heard,” McCartney told CNN.

March For Our Lives was organized by the students who survived the February mass shooting at Marjory Stoneman Douglas High School in Parkland, Florida. Hundreds of thousands of people marched in cities across the United States to demand lawmakers pass common sense gun laws.

While wearing a shirt that read, “we can end gun violence,” McCartney marched along the Upper West Side of Manhattan, close to where Mark David Chapman shot and killed Lennon outside of his apartment building in 1980. “His death is a bitter, cruel blow,” McCartney said at the time. “I really loved the guy.”

The legendary singer-songwriter was happy to answer questions from fans and fellow marchers throughout the event. Lorna Mae Johnson, Assistant Treasurer of the Democratic National Committee, posted a video and spur-of-the-moment interview with McCartney to encourage people to vote.

As a former Beatle and sixties icon, “Sir Paul” is no stranger to protest. McCartney lent his music to the anti-war movement during the Vietnam era and is still seen as a vocal advocate for peace and animal rights today. On Saturday, he spoke of his personal loss to gun violence, honoring his former songwriting partner. He also pointed to the imperative of protest as a way to effect change.

“I don’t know,” McCartney admitted when asked if citizens can end gun violence. “But this is what we can do, so I’m here to do it.”