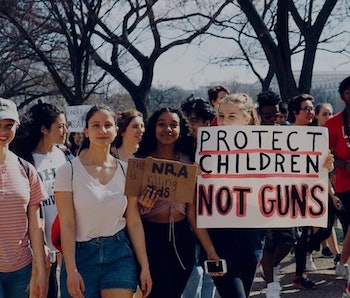 On March 24, students will take a stand against gun violence. March for Our Lives, a protest taking place in Washington, D.C., with 831 affiliated events worldwide, has been organized by the survivors of the Parkland, Florida school shooting where 17 died on February 14. The action has been supported by advocacy group Everytown for Gun Safety, and follows a March 14 national school walkout that saw over 2,000 schools participate. If you aren’t one of the half million people expected to attend Saturday’s rally, there are still ways to join in online.

The event has been organized by Never Again MSD, an advocacy group set up by around 20 Parkland survivors. “MSD” is an abbreviation for Marjory Stoneman Douglas High School, where the shootings took place.

Protesters in D.C. will start along Pennsylvania Avenue at noon Eastern time, but the organizers expect some to start sooner. Initial plans were to march on the National Mall, but a National Park Services permit has been granted to a film crew, a decision criticized by advocates. Road closures already started at 7 p.m. on Thursday and are set to remain in place until as late as 10 p.m. on Sunday.

A staggering number of sister protests will take place around the globe:

How to Watch the Event Live

Tumblr is partnering with Everytown to host a livestream of the Washington, D.C., march through both the app and website. It will also offer relevant content about the protest and gun violence in general.

“For those who can’t join and aren’t able to make those [sibling] marches, we’re giving them some of the tools … to be able to express themselves as part of a digital march on Tumblr,” Victoria McCullough, social impact and public policy lead, told Mashable.

Beyond the Tumblr stream, the organizers are using the hashtag #MarchForOurLives to share content on social media.

Five of the most media-prominent faces of the Never Again MSD campaign appeared on the latest cover of Time magazine to represent their cause. They are:

The Eagle Eye editorial team is another key group of students. The school newspaper of Marjory Stoneman Douglas high school wrote a manifesto for The Guardian that outlines why they are marching.

The organizers have three key demands of the United States Congress, as outlined in the petition:

Following the March 24 event, a further demonstration is scheduled for April 20 on the anniversary of the Columbine massacre.

More like this
Culture
Jan. 14, 2023
2,454 years ago, one eerily familiar event led to the downfall of Ancient Athens
By Rachel Hadas and The Conversation
Science
Jan. 24, 2023
The Doomsday Clock is now at 90 seconds to midnight — here's what that means
By Kiona Smith
Gaming
Jan. 24, 2023
Fortnite is about to get a Wild Dreams concert from The Kid LAROI
By Jess Reyes
LEARN SOMETHING NEW EVERY DAY.
Related Tags
Share: