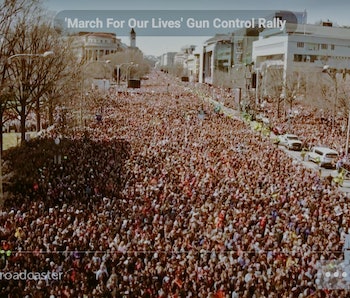 New images from the March For Our Lives protest reveal massive crowds descending on Washington, D.C. More than 500,000 people are expected to march in the capital, while over 800 simultaneous marches are planned across the United States.

“The mission and focus of March For Our Lives is to demand that a comprehensive and effective bill be immediately brought before Congress to address these gun issues,” the statement said. “No special interest group, no political agenda is more critical than timely passage of legislation to effectively address the gun violence issues that are rampant in our country.”

Parkland students raised more than $5.4 million for this march, thanks to a successful GoFundMe campaign and celebrity donations from George and Amal Clooney, Oprah Winfrey, and Steven Spielberg, among others.

The White House also weighed in on Saturday’s march. “We applaud the many courageous young Americans exercising their First Amendment rights today. Keeping our children safe is a top priority of the President’s,” said Deputy Press Secretary Lindsay Walters.

Despite White House support for the massive crowds overwhelming Pennsylvania Avenue, one notable guest was missing. President Donald Trump and First Lady Melania Trump left the White House on Friday and headed to Mar-a-Lago for the weekend. Trump was spotted heading to his golf course right before the March For Our Lives began.