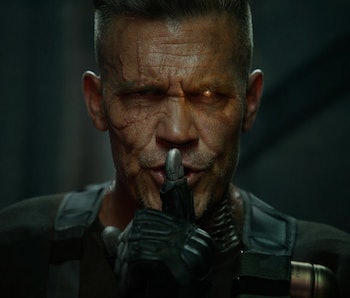 Twentieth Century Fox is really hoping you love Cable and Domino, because reshoots for Deadpool 2 are adding even more of the new mutants.

On Tuesday, Collider reporter Steven Weintraub appeared in a YouTube video to clarify rumors regarding the reshoots for Deadpool 2. Somehow, fans understood the reshoots — additional scenes filmed after principal photography — as attempts to “fix up” the film. The rumors indicated Deadpool 2 was a “train wreck,” a word thrown around by uncredited sources. In the video, Weintraub said Deadpool 2 is seen by the studio as the exact opposite.

The upcoming reshoots, Weintraub says, are adding more scenes featuring the franchise’s new characters, Cable (Josh Brolin) and Domino (Zazie Beetz), after test audiences raved about them. Those same test audiences also rated Deadpool 2 as a “high 90” in a 100-scale measurement, so it’s not like they hated the movie without the extra Cable and Domino.

On YouTube, Weintraub said he’s heard from “multiple sources” about the Deadpool 2 test screenings, which “scored like a 90-91.” A second screening scored even higher, “you know a high 90,” Weintraub said.

“Both crowds at these screenings said they love Josh Brolin as Cable, they loved Domino, but that they would like to see more of both characters in the movie,” Weintraub explained in the video. “Everyone loved both characters. They wanted to see more. So when everyone in an audience gives notes and says ‘We want more Domino, we want more Cable,’ the smart play for the studio is, especially in the competitive summer is, ‘Okay, well, how can we do that? How can we add these characters?’”

He further explained that when additional photography happened sometime around February, the filmmakers did just that: They added more Cable and Domino. “And so that’s the main thing about the additional photography. There was no train wreck,” he said. “There was no, ‘Fans hate this movie,’” he added, “It was, how can we make this movie even better?”

When the first Deapdool was released in February 2016, the irreverent R-rated superhero film exploded at the box office, cementing the Marvel anti-hero as a bonafide franchise. Deadpool 2, which hits theaters on May 18, is adding even more Marvel characters (that Fox owns the rights to), including the aforementioned Domino, Cable, and X-Force characters like Shatterstar.

Deadpool 2 hits theaters on May 18.

More like this
Culture
16 hours ago
8 Norse gods you need to know before Thor: Love and Thunder
By Robin Bea
Entertainment
6.22.2022 11:30 AM
Marvel’s Kevin Feige teases a fix for Phase 4’s biggest problem
By Eric Francisco
Entertainment
7.5.2022 1:00 PM
Like Guns N Roses, Thor: Love and Thunder asks: Where do we go now?
By Eric Francisco
Related Tags
Share: