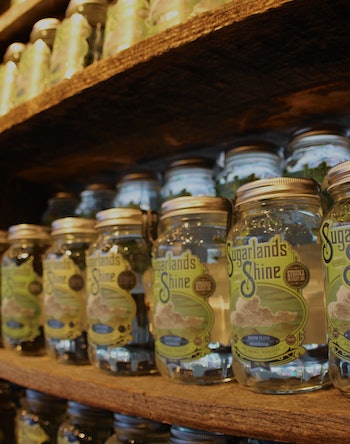 Moonshine has been having something of a renaissance. The colloquial term for clear, non-barrel-aged whiskey — and occasionally other home-distilled spirits — has sparked curiosity in a younger generation of drinkers, prompting books on DIY booze- making, and fancy whiskey brands touting “moonshine” in their name. There’s even a Discover Channel show, Moonshiners, which shines a spotlight on the American folk tradition of home-brewed craft whiskey. Still, if you’re thinking of taking up moonshine-making as your next hobby, you might want to think again.

The production of moonshine — or really any spirit — without a license is prohibited by the U.S. government and is very much illegal.

Although you might see “moonshine” sitting on your local liquor store shelves, it’s not exactly the most accurate moniker for a bottled brand. Clear whiskey in the style of moonshine might be for sale, but technically speaking, moonshine is moonshine because it’s produced illicitly.

In fact, American bootleggers can face jail time for operating seemingly innocent home distilleries. The federal law states that breaking it can have offenders facing multiple federal felonies, including tax evasion, which can result in up to 10 years in prison on top of seizure and forfeiture of the land used for the illegal activity.

Why is Moonshine Illegal?

“While many people understand that making distilled spirits at home is illegal, they’re not sure why or how these laws came to be,” Colin Spoelman, co-founder of Brooklyn’s Kings County Distillery and author of Guide to Urban Moonshining: How to Make and Drink Whiskey, tells Inverse.

The law seems unreasonable on the surface, but when you dig into its history, it becomes a little more clear. Rather than the government fearing you’ll turn yourself blind, the restrictions on moonshine actually boil down to taxes.

It all began right after the American Revolution, Spoelman explains, during which time the government began to place excise taxes on alcohol in order to pay off its debt from the war. From the start, American farmers producing the grain that’s used in moonshine were not having it — after all, they did just fight against the British’s tax tariffs. This tension eventually led to the Whiskey Rebellion, in which George Washington lead a crackdown on farmers making money by distilling their grain into moonshine.

Fast forward to the Civil War era, and making moonshine without paying taxes was officially deemed illegal. In 1862 the Bureau of Alcohol, Tobacco, Firearms and Explosives’s (ATF) passed the 1862 Revenue Act. This act officially imposed a tax on alcohol, among other items, which made distilling without a permit even harder to get away with. The law is meant to “collect taxes, including highly lucrative tariffs on imported distilled spirits and tobacco products.” Unfortunately, this also covered homemade spirits, and it’s been illegal to make spirits in American homes ever since.

Is It Actually Dangerous?

While the illegalization of home distilling feels like an obstacle in today’s craft booze boom, the federal government argues it’s a means to protect consumers. One way the government has been able to market this law is by alluding to the idea that moonshine-making at home is unsafe, due to its potential to be tainted by toxic heavy metal particles. These arguably avoidable risks include tainting the spirit with methanol, which is known to cause blindness. Other risks that can come with distilling your own moonshine include amateur-related hazards like stills exploding.

“In popular culture, moonshine production has often had the conception of being dangerous,” Spoelman says. “Throughout history, the government tended to hype this danger up to push its taxes.”

In general, alcohol has always been heavily scrutinized by the government. “Alcohol has a bad rap for being associated with health issues, and so this makes it a touchy subject when it comes to controlling its production,” Herzberg, a professor of history at University of Buffalo who focuses on legal psychoactives like alcohol and tobacco, tells Inverse.

At this point, you may be wondering whether making your own moonshine is worth the trouble at all. While it is illegal, each state does crack down on moonshiners a little differently.

States in the South — such as the Carolinas, Virginia and Florida — tend to have stricter enforcement due to their history with rebellious moonshiners, Spoelman explains.

But even if you live in a state like Missouri, where an individual may produce up to 100 gallons of spirits per year without a permit, Spoelman stresses that distilling your own moonshine is still risky business. This is because federal law trumps state law, so you still risk facing the aforementioned felonies, regardless of where in the country you live.

As it turns out, while it’s easy to purchase the tools to make moonshine online, the TBB has been known to crack down on unregistered stills. NPR reported that when suppliers do sell stills to amateurs, they “assume that customers are interested in making perfumes, distilled water or some other legal liquid.” This is to stay within the bounds of the law, the suppliers say.

In other words, distill your moonshine at your own discretion.