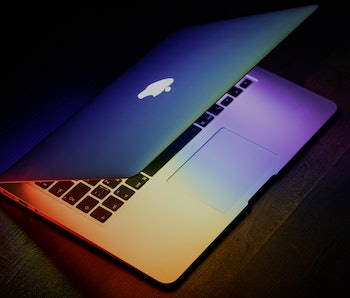 Apple is considering an update to its MacBook line that would eschew the keyboard and trackpad in favor of a second touchable screen. The company’s proposal, revealed in a patent published Tuesday, suggests either a similar folding design to that of today’s laptops or a layout where the top screen would detach from the lower screen, transforming into a tablet.

It’s bold, exciting, and it could be exactly the sort of thing Apple needs to push the MacBook into the next decade.

A touchscreen MacBook has captured Apple fans’ imaginations for a while now, perhaps because it seems an obvious evolution of the desktop metaphor. The iPhone and iPad, launched in 2007 and 2010 respectively, showed that touchscreen computing is not only practical but in some cases desirable. When then-CEO Steve Jobs unveiled the smartphone, he lambasted competitors for shipping pocket computers with a fixed set of buttons. In the process, he inadvertently made the case for a touchscreen MacBook.

“They all have these keyboards that are there whether you need them or not to be there,” Jobs told the transfixed audience at the 2007 MacWorld conference. “Every application wants a slightly different user interface, a slightly optimized set of buttons just for it. And what happens if you think of a great idea six months from now? You can’t add a button to these things, they’re already shipped!”

Eleven years on, and MacBooks still follow the same basic design. Apple gradually moved popular iOS features over to the Mac like an auto save mechanism, app store, and multi-touch controls via the trackpad. But even as the competition brought touch to the laptop, with the Microsoft Surface Pro launching in 2012, Apple stuck to the line that the Mac operating system was designed around keyboard and mice. Shoehorning a touchscreen on wouldn’t satisfy anyone.

“We feel strongly that customers are not really looking for a converged Mac and iPad,” Cook told Independent.ie in November 2015. “Because what that would wind up doing, or what we’re worried would happen, is that neither experience would be as good as the customer wants.”

A dual screen MacBook — more Nintendo DS than Surface Pro — would be something entirely different. Apple wouldn’t need to change macOS to suit a touch interface: In theory, the top screen could display exactly the same interface, while the bottom screen has adaptable touch controls with a “trackpad” area for moving the top screen’s cursor.

This adaptable setup could open up a whole range of possibilities. Games could display their own arcade controls perfect for interaction. Switching between languages would become a breeze, even offering a Chinese handwriting keyboard like on iOS. When choosing from a color wheel in a painting app, the whole pad could illuminate with the colors of the rainbow, allowing you to find your color using a giant pallette.

A detachable tablet model could load up touch-designed iOS in a heartbeat, taking advantage of the unified apps rumored for introduction in this year’s iOS 12 software update to display the same compatible apps in both modes.

It’s also important to note that Apple has already brought a touchscreen of sorts to the MacBook. The “touch bar,” introduced late 2016 that replaces the function keys with a thin OLED strip, shows why a dual-screen MacBook would work well. Final Cut Pro uses it to navigate the video timeline, YouTube uses it to find a position in a video, and apps can even use it to cycle through the emoji picker.

In fact, in an interview about the then-new MacBooks, chief designer Jony Ive shied away from questions about a fully touchscreen MacBook further down the line.

“That puts me starting to talk about things that we are working on,” Ive said. Perhaps Apple’s future is with touchable Macs after all.