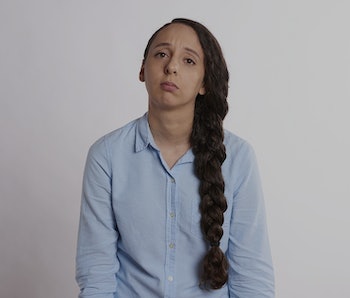 When the brain creates a long-term memory of a special experience, like your first kiss or first breakup, it creates new synapses to connect individual neurons. The stronger the synapses, the more easily you can access the memory. And the strength of those synapses, say scientists, depends on the state of your mind when they are being created.

In a new study in Brain Sciences, researchers from the University of Waterloo report a surprising factor that influences this process of memory formation: anxiety. When the disorder can be managed, they write, anxiety can positively influence the retention of memories. But if it can’t be managed, it can bias memories to the point of inaccuracy.

“People with high anxiety have to be careful,” co-author Myra Fernandes, Ph.D., said in a statement released Monday. “To some degree, there is an optimal level of anxiety that is going to benefit your memory, but we know from other research that high levels of anxiety can cause people to reach a tipping point, which impacts their memories and performance.”

When we try to retrieve memories, we try to remember the original process we used to make the memory. Memory formation, in turn, is influenced by the way our brains encode an incoming memory. ‘Shallow’ processing is when we remember only surface features, like the color of a person’s tie, and ‘deep’ processing occurs when we link those surface details to something else. You may remember a person’s red tie, for example, because you accurately recalled this surface feature, or you may remember it because red is your mom’s favorite color.

To study how anxiety might play into this process, the researchers randomly assigned 80 undergraduate students to a deep encoding group or a shallow encoding group and assessed each person’s level of anxiety using the Depression Anxiety Stress Scales, which ranges from low to high.

In the encoding tasks, the participants each saw 72 words overlaid on either a negative or neutral image, like a car crash or a boat. The shallow encoding group was instructed to just look for the letter ‘a,’ whereas the deep encoding group was asked to think about whether the words on the image represented a living or non-living object.

Then, the participants were quizzed on how well they could recall the words on the pictures. People in the shallow encoding group did the worst job overall, but people that had high levels of anxiety did a better job at remembering words that were laid over negative images. Across both encoding groups, participants with manageable levels of anxiety were the best at recalling details across all words and images.

But the researchers also noticed that high-anxiety individuals had a tendency to remember neutral pictures as negative events, which they explain is a result of the images becoming “tainted by a negative mode of processing.” This is the important caveat to the finding that anxiety can boost memory formation: While manageable anxiety proved to be a boon when remembering details, high anxiety caused neutral information to become biased by the generally negative emotions felt during the memory encoding process.

In his statement, study co-author and University of Waterloo psychologist Christopher Lee, Ph.D. explained that being in a negative mindset can alter the accuracy of your memory. For example, your lunchtime sandwich could have been perfectly delicious, but you may remember it as awful because you got into an argument with your boss before you ate it.

“For the general public,” he explained, “it is important to be aware of what biases you might bring to the table or what particular mindset you might be viewing the world in and how that might ultimately shape what we walk away seeing.”

More like this
Science
5.13.2022 3:01 PM
Can restaurant menus help diners choose climate-friendly meals?
By Tara Yarlagadda
Mind and Body
5.17.2022 11:00 AM
First-of-its-kind study reveals transgender children are extremely unlikely to retransition
By Nick Keppler
Mind and Body
5.14.2022 11:00 AM
How to treat adult ADHD: A psychologist explains medication and more
By Laura E. Knouse and The Conversation
Related Tags
Share: