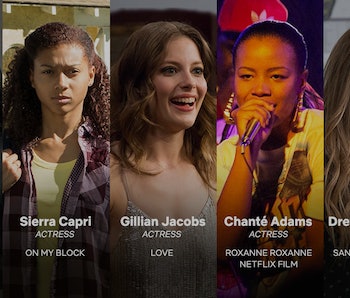 Netflix is joining in celebrating International Women’s Day next month.

“This month is dedicated to the talented, hard-working women on both sides of the camera,” the company’s announcement says.

With the announcement comes a robust lineup of female-powered shows and films set to premiere in March. Here’s some of the more interesting choices to keep an eye out for:

The sophomore season of the popular Netflix original, based on the Marvel comic, will premiere on Thursday, March 8. Not only does the date coincide with International Women’s Day, but every episode this season has been directed by a woman.

My Next Guest Needs No Introduction With David Letterman: Malala Yousafzai

The former Late Show host’s Netflix special features major celebs and public figures. This month, to celebrate Women’s Day, Lettermen will sit down with Malala Yousafzai during the March 9 episode. The 20-year-old is the youngest person to ever win the Nobel Prize.

This British miniseries will star Oscar nominee Carey Mulligan as a detective investigating a dark, mysterious murder. It premieres March 9.

This drama follows the story of a teen girl who joins her high school’s all-boys wrestling team.

The new original documentary series will premiere on March 2, helping to kick off Women’s History Month. The doc follows teenage girls spending their youth in prison, highlighting what it’s like to be a young woman behind bars.

This new Netflix original is the first Argentinian show to premiere on the streaming service. Netflix’s official description is scintillating: “Revenge, passion and dark secrets push a successful fashion designer and single mother to her limits when she meets a handsome and mysterious man.”

Something of an ode to early aughts high school sitcoms, this new show focuses on best friends Alexa and Katie — a cancer patient — as they try to get through their freshman year of high school. Alex & Katie premieres March 23.

This Sundance-screened music biopic, produced by Pharrell, will focus on about rapper Roxanne Shanté and her rise in the male-dominated genre.

It’s unclear how Netflix will market all its women-backed entertainment. It’s safe to assume that the site will begin to roll out the planned content throughout the month. If its current categories are any indication, many of the Women’s Day content will likely be placed under its “Strong Female Lead” category.

Check out this primer from Netflix below: