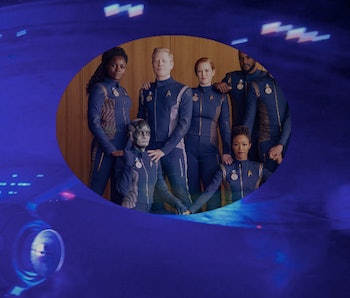 The USS Discovery and the USS Enterprise will probably have an epic team-up in the second season of Star Trek: Discovery. But, what will these two starships do? Based on the existing canonical Trek timeline, we don’t actually know much about what happens in these years, meaning the show pretty much has a blank slate.

Spoilers for Star Trek: Discovery season one and speculation ahead.

On Sunday, the season finale of Discovery introduced the crew to the classic starship Enterprise in the final moments. Because the events of Discovery take place in the years 2256-2257, that now puts it eight years prior to James T. Kirk getting the Captain job on the Enterprise in 2265. And, other than that, we literally don’t know anything that happens in these intervening years, unless of course, you examine the alternate Kelvin timeline from the reboot J.J. Abrams movies. But, in that timeline, the Enterprise wasn’t even in service until 2258, so pretty much nothing from those movies is a good indicator as to what to expect in Discovery’s future.

In old canon, fans have conjectured that 2257 is around the time that Captain Pike stepped down from the Enterprise, which is interesting because if Kirk doesn’t take over for another eight years, what was the Enterprise doing for that time? Presumably, it was taking a much-needed break. We know starships in Star Trek sometimes undergo grueling “refits” that can sideline them for a while. Could the USS Enterprise be running out of steam by the time Discovery encounters her in the season one finale? Maybe.

Either way, this part of the Trek timeline is really wide-open, even with the inclusion of the Enterprise. Back in 2016, when Wrath of Khan director and Discovery consulting producer Nicholas Meyer spoke at the Mission New York Star Trek Convention he commented specifically on why the show’s co-creator, Bryan Fuller, choose this time period specifically. “He found a space in the original chronology where there was room to maneuver.” And now it looks like that statement has come to full fruition.

Season 2 of Star Trek: Discovery can almost do anything it wants because this period of Trek canon is totally somewhere no previous serious has gone before.

As of this writing Star Trek: Discovery does not have an official air date.