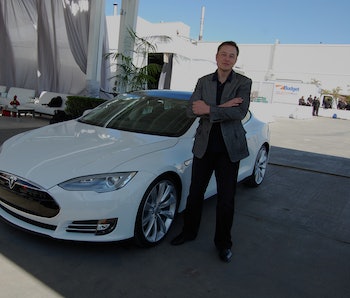 Elon Musk is facing a tough time as Tesla CEO. Although the electric car firm is the highest-valued venture that Musk leads, critics have long questioned whether the tech visionary is destined for — or distracted by — bigger things.

Consider everything else he has going on: SpaceX is trying to launch the world’s largest rocket, The Boring Company is changing the world’s infrastructure, and Neuralink is trying to link up human brains to computer to stop the advance of artificial intelligence. When the automaker announces its fourth quarter 2017 earnings on Wednesday, Musk will need to prove that these factors won’t stop him leading Tesla.

Tesla is in the process of transforming itself into a much larger company, and this comes with teething problems. The Model 3, a $35,000 vehicle designed to bring electric driving to the masses with a lower price tag, has struggled to reach projected manufacturing figures ever since its July 2017 launch. The company produced 2,425 Model 3s in the fourth quarter of the year, where Musk predicted in July that Tesla would reach 20,000 vehicles per month by December. Issues with a subcontractor and a sluggish automation process have left the company falling short.

The firm also has its eyes set firmly on the future. Full self-driving capability, available as an optional extra with existing vehicles, still has yet to launch. Cross-country autonomous road trips also missed their 2017 launch date. On top of these upcoming features, Tesla also plans to launch a Model Y sports utility vehicle, second-generation Tesla Roadster and a Semi electric truck. In the case of the latter, Tesla promises a “megacharger” every 400 miles capable of replenishing the truck’s battery in half an hour.

It’s a dizzying number of challenges for any CEO to manage, but Musk also has big tasks at his other firms. SpaceX is set to launch its Falcon Heavy rocket on Tuesday at NASA’s Kennedy Space Center in Florida, the world’s largest rocket that paves the way for a manned mission to Mars. The Boring Company has used an unconventional fundraising method of selling flamethrowers to the public in a bid to power its dreams of building a hyperloop-esque tunnel from Chicago’s O’Hare Airport to downtown. Neuralink and OpenAI are also working to develop artificial intelligence in a socially conscious way.

Musk has no shortage of critics that believe his position at Tesla doesn’t make sense. In a story titled “Elon Musk Has Better Things to Do Than Run Tesla,” Wired argued in July 2017 that “he possesses far too much talent and ambition to run an automaker.” Jim Chanos of Kynikos Associates said in November that Musk had a “questionable relationship with the truth” and that he would likely step down by 2020.

This seems very unlikely to happen, however. Perhaps sensing that Musk is a major asset, Tesla has rolled out a 10-year performance award program that only pays out if he stays as CEO or, failing that, serves as executive chairman and chief product officer at the same time. Musk has a huge reason to stay, but now he needs to show he can help Tesla meet its goals without letting other projects divert his attention.