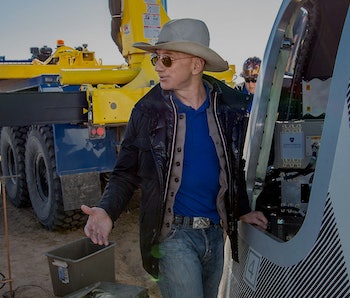 It seems that two Space Dads have put aside their ongoing feud to send along good rocket launch vibes — for now.

Clearly, this tweet marks an important step in the Bezos-Musk frenemy timeline. Back in November 2015, the two squabbled over who had the bigger, better rocket. It seemed like the Billionaire Boys would never be able to put their differences aside, as evidenced by their various subtweets.

The same day Musk fired off these passive-aggressive tweets, Jessica Pieczonka, Head of Communications for Blue Origin, suggested to Inverse that perhaps SpaceX was receiving too much attention for its accomplishments.

“SpaceX is only trying to recover their first stage booster, which of course is suborbital,” Pieczonka said at the time. (Emphasis ours, because we live for the drama.)

It took a few years, but with less than a day until the Falcon Heavy Launch, we’re glad to see Jeff extending the olive branch.

With 27 Merlin engines attached to a monster launch vehicle, there’s a lot that could go wrong with the Falcon Heavy’s maiden voyage. Even Musk has been extremely candid about this. So it’s at the very least not terrible that Bezos has decided to say something nice, even if he probably doesn’t mean it. Who knows.

No matter how this rivalry continues to play out, one thing’s for sure: it sure is weird to watch billionaires argue about their very expensive stuff.