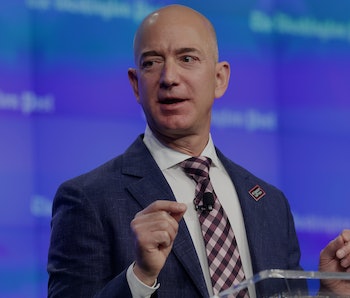 Amazon has apparently been trading quite well. Founder and CEO Jeff Bezos sold a portion of his stake today and raised his personal fortune from $59.3 billion to $60.7 billion. In related news, I am two stamps away from a free coffee down the street from my freelance media job, so financially things are good all around.

It’s unclear exactly what this massive-but-also-in-context-kind-of-not influx of capital means for Bezos’ other ventures, namely his ambitious private spaceflight company Blue Origin. It’s no secret that Bezos is funding a big chunk of the company with his own money — likely more than half a billion by now, making the $25-ish million investment from NASA seem almost precious by comparison.

So in a single day, Bezos has made enough to increase Blue Origin’s budget exponentially, though there’s no real sign that it was hurting for cash before. It’s been a remarkably steady and impressive competitor against somewhat flashier rival SpaceX, and it’s currently at the forefront of development in the space tourism sphere.

Though the race between the two private space companies is hot, SpaceX founder Elon Musk doesn’t have nearly the bucks that Bezos does; Forbes.com shows his worth to be 12.3 billion, good enough for 94th on its 2016 ranking of the world’s billionaires.

Blue Origin has taken it upon itself to carry on the suborbital mission work exemplified by NASA astronaut Alan Shepard, working to help train astronauts for eventual space missions. Most notably, its third rocket launch last month was “flawless,” (Bezos’ words, but also mine) cementing Blue Origin’s reputation as a company that can deliver the goods not just once, but consistently. An extra $1.4 billion in the founder’s pocket can only mean good things going forward.

More like this
Innovation
7 hours ago
Bentley Flying Spur Hybrid review: Price, specs, and one annoying thing
By Jordan Golson
Innovation
5.13.2022 11:00 AM
These robots have one special skill that could make human chefs obsolete
By Sascha Brodsky
Innovation
5.12.2022 6:00 PM
Star Wars: A robotics expert reveals the The Mandalorian's biggest flaw
By Sarah Wells
Share: