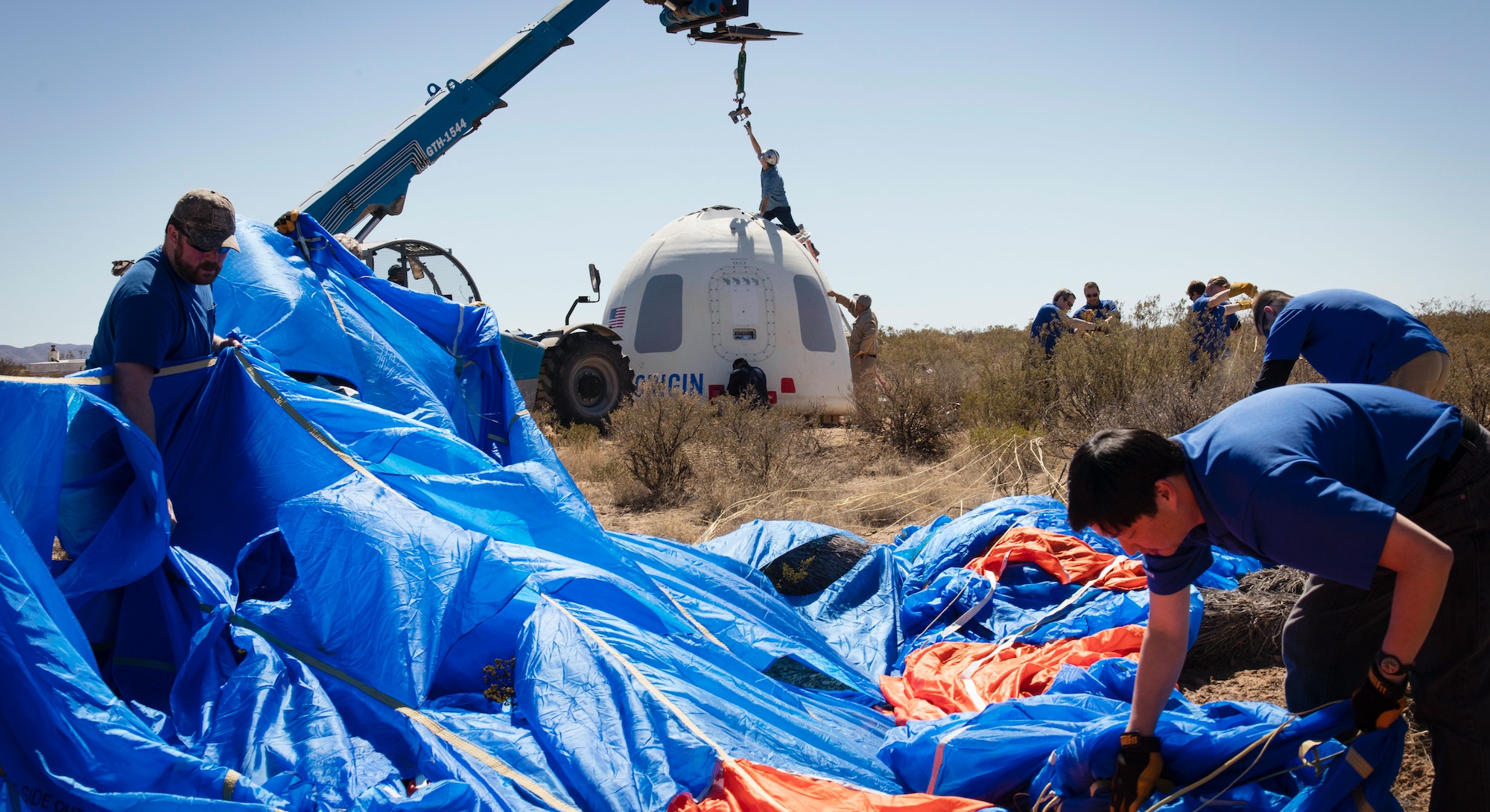 Blue Origin is known for its tight-lipped behavior. The privately funded aerospace company that plans to take humans to space by 2018 generally likes to maintain a low profile about its rocket launches, usually giving a day’s notice and a heavily-edited highlights video afterward. There are certainly no live webcasts. The latest example was when it landed its New Shepard rocket for the third time after a trip to suborbital space.

So it’s no surprise that not much is known about Blue Origin’s curious, slightly fantastic coat of arms that again caught our attention when the company uploaded new photos from that third launch event on April 3. A photo with Blue Origin employees gathering up the crew capsule’s big blue parachute in the foreground hugs its central subject, a marshmallow-shaped capsule with a tiny door, and on that tiny door, four turtles:

Take a closer look at the door:

Do those four turtles represent the number of passengers that will travel in the capsule to space one day? No, Blue Origin has stated there will be six. And why turtles? Bezos’s Twitter account holds the answer: Each tortoise marks a “successful [crew capsule] mission.”

Those same reptiles also appear on the company’s coat of arms that we’ve only seen glimpses of in recent months as Blue Origin has increasingly been in the news.

A few reporters spotted the crest on the second floor reception area during a tour of Blue Origin’s Kent, Washington headquarters. The design has a vintage 17th century look, which is a refreshing break from most corporate logos. Two tortoises on Earth stretch up toward the golden cosmos above, mouths hanging open in wonder. To the upper right is a rocket soaring above a map of European sailing ships like the ones during the height of 15th century exploration — an homage to daring explorers of our past.

Below the Earth is a scroll surrounding a winged hourglass — a symbol of fleeting time — and with the word Gradatim Ferociter, which roughly means “step by step, ferociously.”

This has been Blue Origin’s Latin motto since the company was founded back in 2000, and is displayed on most all official company material. Even Blue Origin chief and Amazon founder Jeff Bezos has a pair of cowboy boots emblazoned with the Latin phrase. It loosely translates to “step by step, ferociously” or “courageously,” as the company website states:

“Driven by our company motto, Gradatim Ferociter or ‘step by step, ferociously,’ our incremental development process builds upon each success as we develop ground-breaking spaceflight systems.

In his book documenting the development of Amazon, The Everything Store: Jeff Bezos and the Age of Amazon, Brad Stone writes that Gradatim Ferociter also captures Amazon’s philosophy: “Steady progress toward seemingly impossible goals will win the day. Setbacks are temporary. Naysayers are best ignored.”

Blue Origin has incorporated both the coat of arms and the Gradatim Ferociter into several company entities including entertainment and education services on all things related to launches, vessels, space flight, and simulations.

When Inverse reached out to Blue Origin to find out the backstory of its coat of arms, the company responded with this deflating line: “Thanks for your email. Unfortunately, Blue Origin has nothing to contribute at this time.”

A former Blue Origin intern, Cindy Fan, explained the coat of arms and motto on Quora: “The tortoises reaching for the stars allude to the story of The Tortoise and the Hare.”

Given the company’s history at being deliberate and careful with the numerous test launches it has executed so far, it makes sense why there are turtles in the seal. Inverse reached out to Fan and she responded that she learned about the story from talking to full-time employees at Blue Origin during her internship.

“In a similar vein to ‘Gradatim Ferociter’ (step by step, ferociously), the moral of The Tortoise and the Hare story is ‘slow and steady wins the race,’” Fan says.

The hourglass with wings in between the banner symbolizes human mortality. The tortoises reaching for the stars allude to the story of The Tortoise and the Hare. Finally, the tortoises are holding a plaque with orbital altitudes above the earth.”

Fan also wrote that the coat of arms was designed by an architect that created other art pieces and structures of Blue Origin’s headquarters.

“Blue Origin will probably always be underrated, especially when compared to SpaceX,” Fan expressed her opinion in a separate Quora answer.

People who have not worked at Blue typically know very little about what the company is actually like. Even if you know someone who works there, you rarely get more than quiet pride. And that’s just the way Bezos likes it. Blue Origin doesn’t try to get everyone’s respect by flaunting all that it’s got; respect is earned by delivering results.”

In March, during that media tour of Blue Origin’s facilities in Kent, Washington, Bezos described the coat of arms that hangs in a central area of the headquarters, telling the New York Times, “You can do the steps quickly, but you can’t skip any steps.”

During that media tour, Bezos said that his dream is to see space exploration as an alternate means to obtain raw materials and energy as Earth’s continues to be depleted. He foresees crafts shuttling off to mine resources to do the manufacturing in space, allowing Earth to return to its natural state and be a place to simply live. We should expect things to continue to be kept on the down-low because Bezos tells the New York Times that “space is really easy to overhype.”

As for the future of Blue Origin, Bezos told CBS This Morning shortly after the company was able to land the rocket in November: “The longterm vision of Blue Origin is millions of people living and working in space,” he said, adding that “reusability is a total game-changer for that.”

Will those millions of people have turtles on their crew capsules? We hope Blue Origin brings that crest to the forefront again soon.