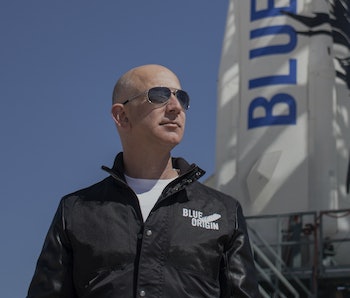 Jeff Bezos may not deny rumors that he only started Amazon to fund his dream of going to space, but with an estimated net worth over $45 billion, he now says he wouldn’t be satisfied with merely reaching space, he wants to ride one of his own rockets.

And now he can. Bezos’ reusable rocket company Blue Origin has now launched the same New Shepard rocket three times to sub-orbital space, bringing it back safely each time, placing the company on track to start testing human flights next year. In a talk at the Space Symposium in Colorado, Bezos said the company’s promise deters any regret he might have about rejecting a ride to the moon on a Russian Soyuz rocket, reported Alan Boyle of GeekWire on Tuesday.

Bezos said the first commercial rides on a Blue Origin rocket may come as early as 2018, a date we first heard about a few weeks ago, though he did not specify whether he would be taking the first one. He may be planning to let a few guinea pigs go first though, since he squashed the Russian proposal to send him around the moon after learning the mission had never received proper testing, reported CNBC.

“The Soyuz is theoretically designed to do a lunar flyby and then re-enter,” he said. “So I looked at this, and it was expensive. Like $200 million or something. I said, ‘Yeah, but has it ever been tested?’ And they were like, ���Well, no.’”

“Isn’t that a little risky?” Bezos said he asked.

But it was Bezos’ desire to top this kind of ludicrous offer that has driven Blue Origin to try to open the frontier of space to more people. While the company has not yet nailed down a price for rocket rides, Bezos said that, after the last return of New Shepard, the main first stage required only a few thousand dollars worth of maintenance before being ready to launch again.

“We never took the engine out of the vehicle,” he said, as reported by Jane Wells of CNBC.

Potential space tourists may be saving money on a trip with Blue Origin compared to the major space agencies, but they also would get only a dose of the astronaut experience. The 11 to 12-minute flight would permit only a brief period of weightlessness, albeit with incredible views of the Earth. One advantage, though, is that passengers would not need to undergo extensive training, as has been proposed for the Virgin Galactic flights.

Bezos said that, while preparing for a spaceflight of his own, he trained his body in a centrifuge at Wright-Patterson Air Force Base in Ohio.

“If you’re subject to motion sickness, you might not want to do that,” said Bezos, as reported by GeekWire.

And despite his plan to ride one of his own rockets to space first, Bezos isn’t feeling particularly competitive these days. Whether he really feels that the dawn of a new industry will allow plenty of competition, or he’s just trying to make up for his occasionally petty behavior on Twitter, Bezos went so far as to say he hoped his competitors, including Elon Musk’s SpaceX, succeed.

“Great industries are usually built by not just one or two or three companies, but usually by dozens of companies. There can be many winners,” he said, reported Miriam Kramer of Mashable.