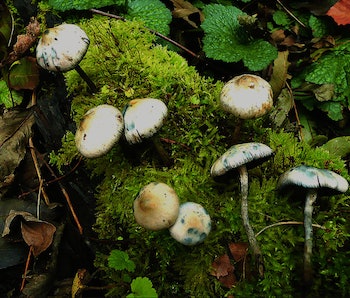 Sometimes stereotypes exist for a reason: While magic mushrooms — fungi that include a psychedelic compound called psilocybin that binds serotonin receptors and makes the brain trip — are now being used as a very real treatment for anxiety, depression, and addiction, many still presume that people who eat magic mushrooms are merely liberal nature-lovers who oppose the status quo.

And according to a paper published last week in the Journal of Psychopharmacology, those people are kind of right.

Researchers from the Psychedelic Research Group at Imperial College discovered that, in at least a small sample of subjects, ingestion of psilocybin was correlated with both an increased feeling of being part of nature and an increased dislike of authoritarian, political views — the sort of thinking that promotes governments being controlled by a small elite and not the people.

The researchers studied this not to prove a point about stereotypes but to demonstrate that psychedelics can promote enduring changes in personality traits, attitudes and beliefs — something that’s been hinted at in previous work. They write that although they think it’s premature to infer causality because of the small size of the study, “the possibility of drug-induced changes in belief systems seems sufficiently intriguing and timely to deserve further investigation.”

This pilot study included seven participants diagnosed with treatment-resistant major depression (TRD) and seven healthy participants that acted as the control group. As a whole, the participants were 79 percent white and 64 percent male. The TRD participants were administered psilocybin in two oral dosing sessions, separated by a week. They were then evaluated one week after the second dosing session, and then again sometime between seven and twelve months later. Before the study began and during the evaluation sessions, both the TRD group and the control group were assessed by the Nature Relatedness Scale and by the Political Perspective Questionnaire.

While psychedelic drug use, including the use of magic mushrooms, in the 1960s and 1970s was associated with a counter-culture, anti-establishment movement, this controlled study is the first to show that a psychedelic drug can actually ignite lasting changes in political views. This study also picks up where research conducted during that time period left off — Imperial College researchers write that early research on recreational LSD users scored “higher on attitudes of ‘personal liberty’ and ‘foreign policy liberalism’ than control subjects.” They hypothesize that, because psilocybin acts on the serotonin system, it, in turn, drives more moral decision-making, but the researchers note that needs to be studied further.

The finding that psilocybin causes someone to feel closer to nature supports previous research that found psychedelics are correlated with pro-environmental behavior. In this new paper, the researchers also write that this makes sense: Feeling that you are a part of nature is known to be associated with lower levels of anxiety and promote psychological well-being. Because psilocybin both eases anxiety and ignites a feeling of connection with nature, there is likely a connection there.

“Before I enjoyed nature, now I feel a part of it,” one trial participant reported. “Before I was looking at it as a thing, like TV or a painting. . . [But now I see] there’s no separation or distinction, you are it.”