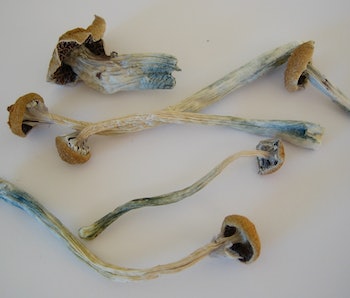 Magic mushrooms have long been relegated to the insides of Fruit Roll-Ups and dorm rooms, but the psychedelic drug’s in the midst of an image overhaul: it seems to be a powerful anti-depressant.

In a new study funded by the UK Medical Research Council and published today in the prestigious Lancet Psychiatry Journal, the drug is shown to be an especially potent anti-depressant, giving it serious credibility within the science and media realms.

While the drug’s anti-depressant properties have been investigated before, the clinical trial, carried out by a team of scientists from Imperial College London, is noticeably more high-profile than the smaller-scale studies that preceded it because of its federal funding and acceptance into a well-respected journal.

The research has caught the eye of high-profile media outlets like The Guardian, which reported that there are ongoing difficulties in securing support for psychedelic research. The Independent called the findings a “serious breakthrough.”

Led by Robin Carhart-Harris, Ph.D., a leader of the new crop of scientists reviving academic psychedelic research, the study is a proof of principle that just two doses of psilocybin — the active ingredient in the mushrooms — can lift resistant depression for three weeks, with the effects lasting up to three months afterward.

Because the science world is still leery of such research, the trial was a small one, including only 12 participants, and it didn’t include a control group. At close to $2,160 per dose of psilocybin, the research isn’t cheap, and the drug took 30 months to acquire. The researchers hope that the success of their study will help them secure additional funding from the MRC or other funders for the larger-scale, follow-up trial needed to advance the research toward clinical use.

“The results of this small-scale feasibility study should motivate further research into the efficacy of psilocybin with psychological support for major depression,” the authors write. “More broadly, the present study should help to catalyze the re-emergence of a promising research area in psychiatry.”

Unfortunately, it isn’t exactly a great time to be a psychedelic drug researcher in the UK; at the end of May, the British government, in a short-sighted attempt to curb drug use through prohibition, is pre-emptively banning all psychoactive substances, psilocybins included.