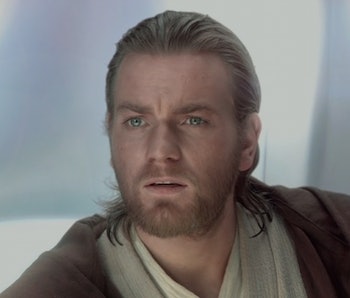 Well, hello there! If Obi-Wan Kenobi is going to star in his own standalone Star Wars film, no one bothered to send a message to the incumbent Jedi master himself. Ewan McGregor says that at this point, he doesn’t really know what’s going on.

On Sunday, the Hollywood Reporter wrote about McGregor’s comments at the Golden Globes. The actor said, “There’s a lot of talk, and I’d be happy to play him again, but I don’t know anything more than you do.”

In August 2017, the Hollywood Reporter also seemingly “confirmed” that a standalone Obi-Wan film was underway with Stephen Daldry directing. But now, the man most likely to play Obi-Wan, says he’s not sure. To be clear, Ewan McGregor saying he has no idea what’s going on with an Obi-Wan movie is pretty common. He said the same thing a few times in early 2017 after getting fans fired up in 2016 when he said he would be interested in doing “two of them.”

Is Ewan McGregor pulling an old Jedi mind trick on all of us? Or does he really not know what’s going on? After the highly circulated story of the Obi-Wan movie, several more standalone Star Wars movies were also reported in the press, including a Yoda movie, and bizarrely, a Jabba the Hutt movie. And yet, none of these projects have been confirmed by Lucasfilm. Instead, the next big set of Star Wars films after Solo and Episode IX is a brand new trilogy written and directed by Rian Johnson. Unless Johnson’s trilogy is an Obi-Wan movie, a Yoda movie, and a Jabba the Hutt movie, it would appear that the early rumors of these other Star Wars movies are about as accurate as that fake location of a Rebel base Leia lied about back on the Death Star.

Still, Ewan McGregor did provide the voice of Obi-Wan for one line in The Force Awakens in 2015, and no one saw that coming. Meaning, it’s still possible that he’ll pick up the lightsaber again and stroke his beard thoughtfully someday soon.