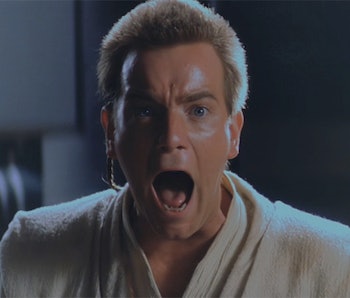 There has been a disturbance in the Force, as if millions of fans voices cried out and were suddenly validated. After seemingly endless speculation about the possibility of a stand-alone Star Wars film about the Jedi Master Obi-Wan “Ben” Kenobi, it now looks like it is really going to happen.

On Thursday, Borys Kit of the Hollywood Reporter broke the news that Oscar-nominated director Stephen Daldry is “in early talks to direct a Star Wars standalone movie centering on Obi-Wan Kenobi.”

Daldry’s best-known directing credits include Billy Elliot and The Hours. It’s unknown what kind of tone he would bring to an Obi-Wan Kenobi movie. It’s also unknown exactly what the Obi-Wan film would be about, though conventional wisdom suggests it would focus on the character’s exile on the planet Tatooine in between the events of Revenge of the Sith and A New Hope.

Originally played by Sir Alec Guinness in the classic trilogy, Obi-Wan was more recently played by Ewan McGregor in all three Star Wars prequel films from 1999-2005.

In 2015, McGregor also lent his voice to The Force Awakens in a scene in which Obi-Wan’s spirit tells Rey that she’s taken her “first steps.”

When previously questioned about the possibility of an Obi-Wan movie, McGregor has usually said it wasn’t happening, or he wasn’t sure. It is unclear now if McGregor would play Obi-Wan in this movie, but it’s almost a foregone conclusion that he will.

Hopefully, this leads to a Jar Jar Binks-focused movie.

The next Star Wars film — The Last Jedi — will hit theaters on December 15.