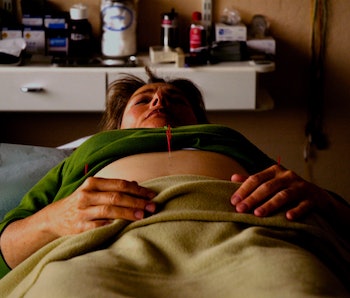 Pseudoscientific life hacks like Goop-approved vaginal jade eggs and “bio-frequency healing stickers” have made it hard to keep an open mind about complementary and alternative medicine. It’s a shame, as there’s plenty that mainstream medicine hasn’t explored that could be useful, if studied in the right way. One classic example is acupuncture — the ancient art of sticking needles into pressure points to relieve pain — which, cancer researchers recently showed, can indeed be very effective.

In the study on 226 cancer patients from 11 different cancer centers across the United States, researchers funded by the National Cancer Institute showed that acupuncture is especially useful in treating the pain caused by a popular class of breast cancer drugs. As the researchers explained on Thursday at the San Antonio Breast Cancer Symposium, the side effects of these drugs — the aromatase inhibitors — include serious joint pain and stiffness, making it especially hard for these patients to perform simple motions, like walking, sitting, and driving. Acupuncture, the study shows, could be the solution to relieving this pain, which affects tens of thousands of women across America.

“I expect this work to influence medical practice, as well as insurers’ willingness to reimburse for acupuncture during [aromatase inhibitor] treatment.”

Skeptics argue that pain relief from acupuncture is simply the placebo effect, but lack of data has made it difficult to argue one way or the other. Part of the reason there are so few legitimate large-scale scientific studies on acupuncture is because it’s very hard to do controlled trials. It’s not easy, after all, for scientists to give a “fake” treatment to a control group when the treatment involves sticking needles into their body.

The scientists behind this trial, however, used a “sham” acupuncture method that involved inserting needles superficially into parts of the body that aren’t considered therapeutic. Twice a week for six weeks, a third of the 226 patients in the study received the sham treatment, another third received actual acupuncture, and the rest got no treatment at all.

After an additional six weeks of maintenance treatment, the patients reported on how much pain they’d felt over the course of the trial. On average, the patients who received the real acupuncture treatment felt less pain than those in the other two groups, and the relief lasted for an average of 24 weeks.

These encouraging results make acupuncture an increasingly legitimate option for people suffering from this particular type of pain. It’s especially useful in this case because many patients already taking aromatase inhibitor drugs for their breast cancer don’t want to add painkiller or opioid drugs to their treatment regimens.

Whether scientists will be able to show that acupuncture is useful for other types of pain remains to be seen. For all its positive effects, acupuncture and its actual impact on human physiology still remains a mystery to mainstream scientists.

Some scientists suspect it activates our pain-relieving centers in the same way that painkilling drugs do. In a previous interview with Inverse, Dr. Elizabeth Manejias of the Hospital for Special Surgery in New York City, a doctor of sports medicine and physiatrist, explained that acupuncture “activates local nerve fibers around the ankle joint, for example, but then it also sends signals through the spinal cord to your brain, and it activates centers in your central nervous system.” Once they’re activated, those parts of the nervous system are thought to release endorphins, which block pain signals in the brain.

Whether or not acupuncture really works as a form of pain relief, it’ll never gain traction in the medical community unless it’s studied in more depth by in legitimate scientific trials. The success of the new study may motivate more mainstream scientists to do so, and hopefully, they do so soon — as the opioid painkiller crisis continues to mount, the need for an alternative form of pain relief increases every day.

More like this
Science
6.28.2022 10:00 AM
How are drugs absorbed in the body? The science of medicine, explained
By Tom Anchordoquy and The Conversation
Science
6.16.2022 10:00 AM
Climate change and air pollution are wrecking children’s health, a landmark review reveals
By Tara Yarlagadda
Science
6.26.2022 11:00 PM
The powerhouse of the cell has a more complicated origin than we thought
By Viviane Callier and Knowable Magazine
Related Tags
Share: