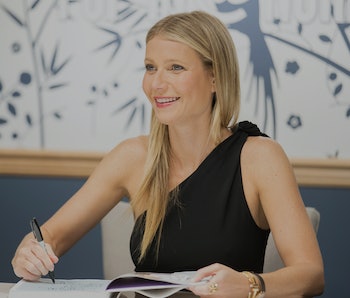 Gwyneth Paltrow’s life just got a lot goopier. The actress, who runs the lifestyle magazine Goop for wealthy white women like herself, was recently interviewed on the Jimmy Kimmel Live!

When asked about earthing, one of the many dubious wellness practices her site promotes, Paltrow struggled to explain, ultimately saying, “I don’t know what the f—- we talk about!”

From there, things only got more awkward as Paltrow proved unable to explain anything about her website, where she claims she’s worked “all day every day” for almost a decade. The audience’s laughter, which started out hardy, died down over the course of the interview as her utter lack of conviction for Goop became apparent.

While Paltrow clearly knows goop about Goop, we here at Inverse have a lot to say about the site’s pseudoscience. So here’s a debunking of everything from jade eggs to vaginal steams — for Gwyneth and for you.

For several hundred years, women have been encouraged to douche. Before it was a bad word for rude dudes, it was a popular way of cleaning female nether regions. Basically, a woman would take a turkey baster-like apparatus, fill it with warm water or Lysol’s aggressively mark douching liquid, and aim. Many believed it washed away “bad” odors and cleaned out menstrual blood, semen, and even sexually transmitted infections.

The thing is, it does, um, none of these things. While a third of Americans continue to douche, doctors say it actually increases the risk of infection, pregnancy complications, and other health problems. Turns out, Jay Z was right about the power of the p-u-s-s-y, sort of. A healthy vagina is self-cleaning and getting in its way only makes things worse for everyone involved.

(One exception, it must be noted, is for those who have undergone gender confirmation surgery, who should absolutely douche if their doc recommends it.)

While Paltrow doesn’t exactly advocate douching, she does push for something called the vaginal steam. For about $100, you can hold your genitals over warm water vapor and, reportedly, moisten your vagina and even out your hormones.

It’s unclear if the steam causes problems like traditional douching can. But what is clear is that this an expensive solution to a non-problem. Vaginas are self-lubricating, so the moistness thing is already taken care of. For women who need help lubricating, steam isn’t going to do much, because it will eventually dry up. More importantly, hormones are mostly made in the pituitary gland near your brain and the adrenal glands on your kidneys, not your reproductive organs, so steaming your “yoni” (as Paltrow calls the vagina) won’t balance anything.

For just $66, Goop will also sell you a jade egg that you insert into your vagina regularly to improve your sex life.

But reality bites once again.

First of all, the jade egg’s claim to fame relies on the idea that crystals and other minerals heal, as well as assertion thats there are different kinds of “energy” at work in the world. These types of statements are endearing when they come from your wacky favorite aunt, who, in all honesty, is probably a subscriber to Goop. But there’s no science that says they are anything other than placebos — things that work to a limited degree if you believe in them, but have no objective healing properties.

While you absolutely can do physical therapy to strengthen the walls of the pelvic floor if it’s medically necessary, these exercises won’t lead to a hormonal balance, because, once again, hormones have little to nothing to do with the vagina.

Ok, so, putting wasp nests in your vagina isn’t actually something Gwyneth Paltrow does. But it sure sounds like a Goop-lover’s idea, doesn’t it?

Last week, an Etsy site exploded because it’s selling women oak galls to shove up their vaginas in order to kill supposedly harmful bacteria. Oak galls are small notches that form in when wasps lay larvae in the branches. They do appear to have some antibacterial properties, but the vagina is fundamentally self cleaning, so this is totally unnecessary. Plus, the galls are angular and can scrape your soft nether regions. Oh, and they’re a drying agent, sucking up perfectly normal vaginal juices.

While I imagine it is really fun to be Gwyneth Paltrow — or one of her wealthy disciples — and have the money to manufacture “wellness,” it’s hard not to read about her latest pseudoscientific stunt and feel a little righteously angry.

A little righteously angry on behalf of all the all the women who’ve been told, that their anatomy is gross and should be fixed with time, money, and self-loathing.

And on behalf of the millions of Americans whose real, vital healthcare is in jeopardy and cannot be replaced by Goop’s $85 medicine bag full of random gemstones.