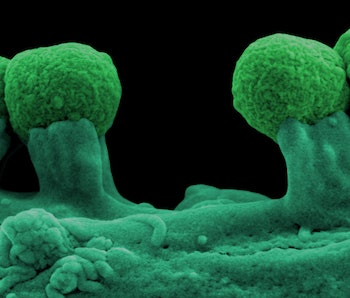 Bacteria have been the dominant life form on Earth for 3,500 million years. For every human cell in your body, there’s a bacterial one; for every human walking over the face of the planet, trillions and trillions of bacteria squirm, flagellate, and generally hump their way around. To celebrate these masterful microbes, here is a definitive ranking of the best bacteria of all-time.

The bacteria here have been culled from millions of candidate species. So have some respect for number 10.

10. Pseudomonas syringae … because they make it rain

We think of rainstorms, sensibly, in terms of pressures and temperatures, but certain bacteria lend a biological tint to the process. Snow and rain need a trigger — a nucleus or core — that causes water in the air to coalesce into a droplet. Mostly, these cores are dust, but a handful of studies find that bacteria do the trick, too — in one case, 70 percent of snowflakes examined on a mountain had a bacterial nugget at the center. The bacteria Pseudomonas syringae is particularly well known for bioprecipitation because it secretes a protein that allows ice to crystallize at higher cloud temperatures. In fact, researchers are attempting to yoke bacteria for agriculture by growing Pseudomonas-friendly wheat in arid regions like Syria.

9. Photobacterium leiognathi … because they burrow

Most creatures spend their lives avoiding hungry maws, but certain bacteria radiate a bright green color that’s irresistible to nearby algae. Eaten but not digested, the bacteria known as Photobacterium leiognathi glow within the plankton. Fish, in turn, munch on the newly bioluminescent plankton. The end result? Like Jonah, the bacteria get free rides to parts of the ocean they’d never reach alone.

8. Gloeocapsa magma … because they can spacewalk

Bacteria spent more than a year in the harsh conditions of space and lived, a 2010 experiment that took place on the skin of the International Space Station showed. The photosynthesizing bacteria — which appear to be related to Gloeocapsa cyanobacteria, which live in protective clusters and have the remarkable ability to repair DNA — or something like them could be handy biological companions to future deep space explorers.

Look at your hand, and you can’t see teeming hordes of bacteria — but your skin is crawling with T. namibiensis. Sporting a name that means “sulfur pearl of Namibia” and clocking in at three-fourths of a millimeter in length, it’s about three million times the size of the average bug. Think of a person, then imagine a person the size of the entire population of Chicago, and you’d have a sense of how unusually large Thiomargarita namibiensis are.

A bacteria called Wolbachia gets weird when it invades gonads of butterflies and other insects. As University of California, Santa Cruz microbiologist William Sullivan tells Inverse, the bacteria live within the cells of insects and “hang out in the centrosome.” It does amazing things, he says: “It’s like mitochondria — it’s inherited maternally, and because of that, from its perspective it has no use for males in a population. So it will kill off all the male insects or change a male to a reproductive female. Or make an insect parthenogenetic so she doesn’t have to mate.”

5. Deinococcus radiodurans … because it chills in nuclear waste

The bacteria Radiodurans shrugs off radiation better than any cockroach around. Radiation of 5 grays kills people; D. radiodurans handles 2,000 times that. When biologists went looking at the Hanford site in Washington state — where there’s 107,000 tons of spent reactor fuel — they discovered that life (as D. radiodurans practices it) had found a way.

4. Halomonas titanicae … because ships are delicious

The unsinkable sunk ship won’t be much more than rust scraps at the bottom of the sea in three decades’ time, thanks to a bacteria known as titanicae. The little buggers are eating away at the steel and iron, leaving behind only brass knobs and James Cameron’s visions of steamy handprints.

3. Arthrobacter species … because they are 8 million years old

In 2007, scientists at Rutgers University said they were able to revive a sample of Arthrobacter bacteria, which had remained dormant in Antarctic ice for 8 million years. Taking a more mystical approach to old germs, a decade later a Russian researcher would inject himself with 3-million-year-old bugs believing (though it’s impossible to prove) the hoary microbes are making him healthier.

Seafloor germs connected by bacterial nanowires of sorts help each other out over vast distances. (On the order of a few centimeters, anyway, which is distant on a microbial scale.) Researchers from Denmark published a paper in 2010. At the time of the discovery, Nature wrote that it’s as if some of the bacteria took care of the breathing part and others ate on behalf of everyone else; others compared it to the interconnected sci-fi ecosystems of James Cameron’s Avatar.

1. Escherichia coli … because it can control robots

E. coli gives (it’s a rock upon which microbiology is built) as good as it takes (a nasty strain causes food poisoning). But E. coli also pops up in places you wouldn’t expect. In July, a group of Virginia Tech researchers argued that robots could use a bioreactor full of the germs as a control center of sorts — a bacterial brain. So far, they haven’t gone beyond modeling what such a system would look like, but it theoretically would allow robots to make more complex decisions by aping the branching trees of microbial metabolic pathways.

More like this
Innovation
Sep. 22, 2022
Trash can-sized robots could revolutionize how you travel — but there's a catch
By Molly Glick
Innovation
Sep. 21, 2022
Look: Drones could be the future of 3D-printed architecture
By Jennifer Walter
Innovation
Sep. 17, 2022
Why everyday household chores may be practically impossible for today’s robots
By Ayonga Hereid and The Conversation
Related Tags
Share: