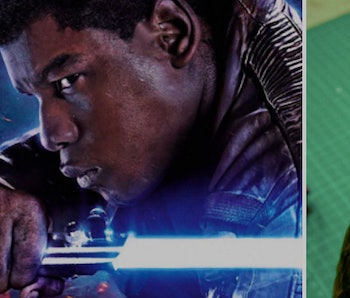 Competing with Daisy Ridley for most charming Star Wars cast member, John Boyega has started making the interview rounds, talking a little bit about his role as Finn in The Last Jedi. And now, he’s dropped something bigger than any spoiler. Boyega has revealed what he really thinks about the newest creatures in the Star Wars galaxy, the Porgs.

“I don’t like them,” Boyega told Mike Strahan in an interview on Good Morning America on Wednesday. Indicating that “the little black eyes” were reminiscent of “holes on trees,” Boyega said with a straight face “I can’t stand them.” While it seems like Boeyga was mostly joking about the Porgs, his comments are somewhat aligned with at least half of Star Wars right now.

Though no one has actually seen the Porgs in context with what they do in The Last Jedi, fans are either slightly annoyed with the cutesy creatures, or totally in love. In a somewhat unprecedented move, Lucasfilm started promoting the behind-the-scenes aspects of the Porgs all the way back in July, well before they were glimpsed in a trailer. To put this in perspective, this would be like Lucasfilm releasing photos of Warwick Davis dressing up as an Ewok in 1983 half a year before Return of the Jedi came out.

“Cute” aliens have a funny history in Star Wars. Some still believe the Ewoks ruined Return of the Jedi, while others maintain that was nothing compared to the goofy antics of Jar Jar Binks in The Phantom Menace. Presumably, Lucasfilm hopes fans see Porgs not as the new Ewoks or Jar Jar, but instead, a corrective type of cuddly creature. Perhaps Porgs are closer to Yoda or BB-8, characters who are important to the story without distracting from it.

Either way, if Finn does encounter any Porgs in The Last Jedi, it will be interesting to see if he reacts any differently from his real life counterpart.

The Last Jedi is out everyone on December 15.