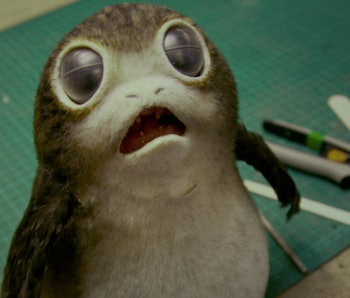 It’s been known for a while that Luke Skywalker will be surrounded by cute, puffin-like creatures in The Last Jedi, but now those creatures have a name: Porgs. And they are the latest, new plush toy alien creature from the Star Wars galaxy.

On Thursday, Star Wars.com posted an interview with Pablo Hidalgo about the revelation of the new creatures and what they’re all about in The Last Jedi. “Porgs are native to Ahch-To and can be found dwelling along the cliffs of the island where Luke and Rey are. In many ways, they’re the Star Wars version of puffins,” Hidalgo said. “They build nests. They can fly. Their babies are called porglets.”

It’s been awhile since Star Wars has made a play at having cute aliens central to one of its stories. In 1983, Return of the Jedi introduced the Ewoks, tiny teddy bears with hearts of gold who sometimes liked to eat human flesh. Of course, the Ewoks were originally going to be a planet of Wookies, but George Lucas decided to go cuter for story reasons and perhaps money. And now Rian Johnson is doing the same thing. “You fall into those deep, soulful eyes,” Hidalgo said of the Porgs. “I think a lot of people are going to want a porg as a pet.” Did Hidalgo provide a link where you can pre-order a porg toy? He did not.

For fans of the epic sci-fi comic book series Saga by Brian K. Vaughan and Fiona Staples, the Porgs look a little familiar, a bit like Ghus from Saga. Back in 2014, several critics compared the popular sci-fi/fantasy comic book epic to Star Wars, including David Sims of The Atlantic. While it’s very unlikely the Porgs were directly inspired by Ghus, the passing resemblance and the Star Wars connection are one of the universe’s unsolvable coincidences. Or maybe the Porgs have an even more sinister origin.

The Last Jedi — we swear this isn’t a commercial for toy Porgs — opens on December 15.