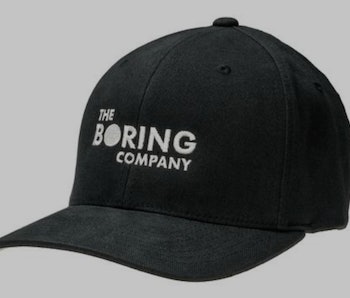 At a relatively cheap $20 a pop, the Boring Company hat being sold to Cool Dads™ across the world has proved a popular item, and Elon Musk, ever the salesman, took the opportunity a few days before Thanksgiving and Black Friday to update his 15.2 million Twitter followers with the good news. A month after its release, sales of this humble hat are doing very well indeed.

The Boring Company, Musk’s project to dig subterranean transportation tunnels — think of a turnpike under the Earth — through which cars would travel alongside hyperloop pods, is underway behind SpaceX headquarters in Hawthorne, California.

On Tuesday, Bloomberg published a little math it did and found that Tesla seems to be “burning money” at a rate of about $8,000 per minute, as the company is building out manufacturing technology to meet the demand of its Model 3, the car that’s seen an estimated 300,000 reservations. But none of the sweatpants money made from hat sales is going to cover Tesla’s expenses, as Musk was smart to point out: “All cash goes directly towards more boring.”

In May, Musk shared this photo of the Boring Company tunnel being built behind SpaceX, and later he followed up with more images from the project, including a photo of Godot, the slow boring machine, and a video of a prototype of a car lift that would transport cars into the tunnel.

Musk wants to make the process of tunnel-digging ten times the cheaper and ten times faster. In May, he shared this video of the boring machine’s cutter spinning with the following caption: “Cutterhead in operation at standard industry speed. Planning to jack this up by a factor of ten or more.”

The end game, of course, is a 3D network of underground tunnels that would alleviate congestion above ground. First up is a possible tunnel project in the Los Angeles area. Then, maybe one on the East Coast, a Boring Co tunnel in Maryland, according to reports published in October.

When it’s all said and done, Musk hopes the underground tunnel system looks something like this video he presented in April at the TED Conference in Vancouver:

Correction: An earlier version of this story stated that the Boring Co. had sold 150,000 hats. It has sold more than 15,000. Inverse regrets the error.

More like this
Science
8.11.2022 5:00 PM
Look: A deep-sea expedition just captured these incredible views of life underwater
By Jennifer Walter
Culture
8.6.2022 2:00 AM
Reviewers are obsessing over these clever, cheap gadgets they use all the time
By Christina X. Wood
Science
8.1.2022 10:30 AM
These 6-million-year-old teeth may be from Europe’s last panda species
By Elana Spivack
Related Tags
Share: