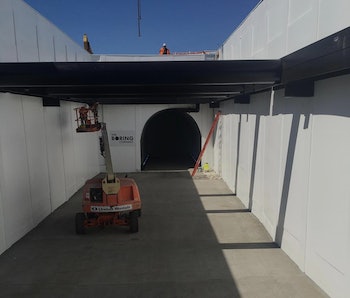 The Boring Company is hard at work redefining the future of transportation. On Friday, Elon Musk revealed that the company’s first tunnel digging machine, named Godot, is ready for action. Preliminary work is complete for the company’s initial construction project, and Musk has shared some of the first glimpses of the company’s handiwork.

Musk’s venture came out of a desire to solve traffic congestion in major cities. The company has a long-term goal of bringing down costs in tunnel construction, enabling cities to build intricate networks running 30 tunnels deep underground. These tunnels could support traditional roads, metro rail, or even vacuum-sealed hyperloops.

The full length of the first tunnel will run from Los Angeles International Airport to Culver City, Santa Monica, Westwood and Sherman Oaks. Future tunnels are expected to cover the whole of greater Los Angeles.

Musk’s team has also started testing the futuristic sleds revealed in last month’s TED talk. These super speedy platforms would lower cars into the ground on the tunnel network and leave more space free on the surface for buildings and parks. The sled is expected to transport cars at speeds of 125 miles per hour, which would mean traveling from Westwood to the airport in just five minutes.

The first machine is named “Godot.” On Thursday, Musk revealed that the company’s machines would all be named after plays and poetry. The first machine’s name references Samuel Beckett’s Waiting for Godot, which focuses on two characters waiting for a third that never arrives.

Segments of “Godot” are now being lowered into the starter tunnel. When assembly completes, the machine will be “a few hundred feet long” and ready to start digging. The public first caught a glimpse back in April, when Instagram user “davesvanlife” shared an image of the first tunnel digging machine emblazoned with the company’s logo.

“Godot” is set to race against Gary the snail when construction starts:

“We’ve got a pet snail called Gary, this from Gary the snail from South Park, no sorry, Spongebob Squarepants,” Musk said at his TED talk earlier this month. “So Gary is capable of currently going fourteen times faster than a tunnel boring machine. We want to beat Gary. He’s not a patient little fellow and that will be victory. Victory is beating the snail.”

The company was first announced last year, in a series of Twitter posts while Musk was frustrated waiting in traffic. The CEO has made clear his thoughts on tunnels on a number of occasions, telling an audience in January 2016 that tunnels could “massively alleviate congestion.”

In the long term, The Boring Company aims to bring something new to the table by changing the digging technology itself, something Musk feels has made little progress in the past 50 years. A more efficient way of removing the dirt could save time, for example, while a new machine design that allows for wall construction without halting the digging process could also cut costs considerably.

In the space of a few months, a series of frustrated tweets has turned into a full company ready to start work.