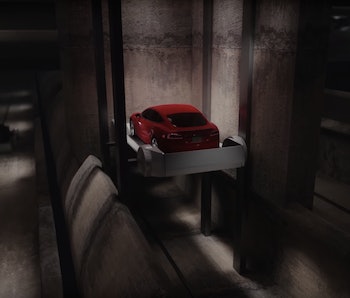 Elon Musk has been digging holes for vaguely-defined reasons for months now, but during a TED talk on Friday, the CEO of SpaceX and Tesla released a concept video of how his Boring Company will shuttle car traffic into tunnels.

The first Boring Company tunneling machine appeared at the SpaceX headquarters on Thursday, but the futuristic concept video is a wild look at what the company could create down the line. The CGI-rendered video shows Tesla vehicles prowling along above-ground streets before pulling into parking spaces that slide underground on giant elevators. The cars then whizz forward through tunnels at speeds of up to 124 miles per hour on wheeled metal sleds, before rising back to the surface to complete their journey.

Once on the tracks, Musk said that the super-speed traffic will be optimized by a computer for maximum efficiency, keeping traffic off the streets. The final shot of the video shows the massive interconnected network of tunnels Musk envisions going below the surface of major U.S. cities, leaving space above ground free for buildings and parks.

The company is already digging near the SpaceX headquarters. Musk has said the hypothetical system would be designed with Hyperloop in mind, and though that doesn’t feature into the concept video, it’s easy to see how the two modes of transportation could link up. Check out the full video below:

“There’s no real limit to how many levels of tunnel you can have,” Musk said.