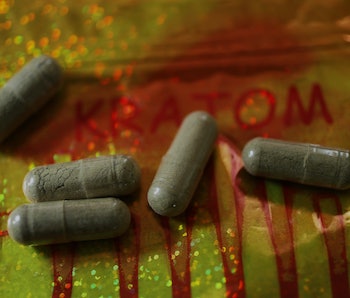 The drug kratom produces effects similar to opioid painkillers: pain relief, euphoria, and gentle sedation. Many people use it as an alternative to prescription opioids, either to treat pain or to alleviate withdrawal symptoms. Not only are its effects similar, but the drug is easier to obtain: You can buy ground kratom leaves and extracts easily on the internet, at smoke shops, and even from convenience stores because it’s legal under federal law and under many state laws.

Its wide availability and ambiguous legal status may make it seem benign, but there’s actually no evidence that it’s safe. In fact, there have been some reported cases of deaths associated with the drug. The United States Food and Drug Administration has taken notice of these issues and on Tuesday, FDA Commissioner Scott Gottlieb, M.D. issued a statement outlining the FDA’s concerns, as well as the group’s plan to take more control of kratom entering and being sold in the U.S.

The FDA has the authority to control any substance being marketed to treat medical conditions, and since kratom is so often sold as a natural alternative to pain and anxiety medications, as well as a drug-replacement therapy for physically dependent people, Gottlieb says it falls neatly within the FDA’s purview. Under FDA rules, any approved drug must pass rigorous clinical trials under FDA oversight to ensure that drugs are safe and effective.

“There is no reliable evidence to support the use of kratom as a treatment for opioid use disorder,” Gottlieb writes. “Patients addicted to opioids are using kratom without dependable instructions for use and more importantly, without consultation with a licensed health care provider about the product’s dangers, potential side effects or interactions with other drugs.”

However, not everyone is looking for a medical treatment when they take kratom, a drug derived from the Mitragyna speciosa plant. Many people are looking for a safe, legal buzz, and the way kratom is marketed can lead people to falsely believe that it is as safe as tea or coffee. It’s even sold alongside other herbal drinks at kava bars, though it’s often on a different menu. Gottlieb says that it’s important that the public understands what they’re dealing with.

“At a time when we have hit a critical point in the opioid epidemic, the increasing use of kratom as an alternative or adjunct to opioid use is extremely concerning,” he writes.

This is not to say that kratom is a public health scourge, or that it needs to be illegalized. If the U.S. government’s handling of drug abuse in the past is any indication, a legal change to kratom’s status will only drive the market further underground and cause more harm in the long run. Proponents of kratom say it can help alleviate opioid dependency symptoms, so it could be useful for helping people addicted to drugs slow down their use until they can receive treatment. And in the face of the growing opioid crisis, it would be unwise to turn our noses up at possible solutions.

That being said, it is also unwise to underestimate the potential risks of burgeoning drugs, as was done with Oxycontin early on in its rising popularity, when doctors downplayed its addictive potential.

“We’ve learned a tragic lesson from the opioid crisis: that we must pay early attention to the potential for new products to cause addiction and we must take strong, decisive measures to intervene,” writes Gottlieb. “From the outset, the FDA must use its authority to protect the public from addictive substances like kratom, both as part of our commitment to stemming the opioid epidemic and preventing another from taking hold.”

The FDA plans to expedite investigations into kratom, so hopefully, in the near future, this drug will receive the medical scrutiny it deserves.

If you liked this article, check out this video where the U.S. and British governments experimented with drugs as mind control.

More like this
Science
6.28.2022 10:00 AM
How are drugs absorbed in the body? The science of medicine, explained
By Tom Anchordoquy and The Conversation
Science
6.26.2022 11:00 PM
The powerhouse of the cell has a more complicated origin than we thought
By Viviane Callier and Knowable Magazine
Mind and Body
22 hours ago
How do painkillers work? Pain scientists explain, from ibuprofen to fentanyl
By Benedict Alter, Rebecca Seal and The Conversation
Related Tags
Share: