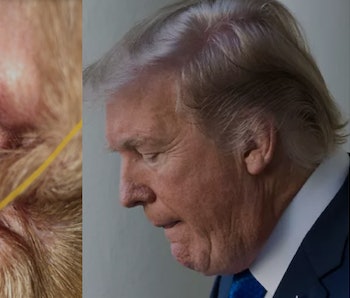 A very good boy named Chief recently startled his human as she realized a cyst in his ear resembled Donald Trump. The dog’s owner, Jade Robinson, first took the picture of the infection plaguing her two-year-old beagle to show to her vet, according to a crowdfunding campaign she created to pay for the medical bills.

“It was my eagle eyed friend who pointed it out,” Robinson wrote on the fundraising page. “I thought I would shared [sic] this with my facebook friends but NEVER thought it would be that popular however overnight our little Chief became an internet sensation trending all over social media!”

Though the resemblance between this unhealthy outgrowth of flesh and the President seems extraordinarily spot-on, psychologists would say it’s nothing out of the ordinary.

The reason we see it is the same reason clouds sometimes look like animals and people find Jesus in their food. This phenomenon of finding familiar shapes and images in everyday objects is known as pareidolia, and it happens all the time.

Our brains constantly analyze and process the ambiguous stimuli (read: random stuff) we see, and they use familiar patterns to make sense of stimuli that at first seem ambiguous. Research on pareidolia suggests that our brains “fill in” missing information so that what we see resembles something we have seen before — in this case, a familiar face in an abstract collection of canine flesh lumps. It’s this same process that allows you to spot a person you know in a crowd of people.

“Finding meaning in ambiguous stimuli appears to depend on conceptual evaluation and cortical processing events similar to those typically observed for known objects,” researchers wrote in a 2011 study on pareidolia published in Cerebral Cortex. “To the brain, the vaguely Elvis-like potato chip truly can provide a substitute for the King himself.”

Although pareidolia can happen to anyone, researchers have found that it’s more common for neurotic people to find meanings in patterns. Neuroticism, in turn, is more common in people who undergo mood changes and emotional stress — often those with mood and anxiety disorders.

So, don’t be worried if you see a face on every power socket and car’s front bumper — it’s completely normal. Save your concern for Robinson’s sweet beagle, who is almost certainly not enjoying having a Trumpian cyst in his inner ear, and hope that the right chief makes it through this ordeal.

More like this
Science
Jan. 28, 2023
How does the placebo effect take hold? A doctor explains two influential factors
By Kathryn T. Hall. and The Reader
Science
Feb. 1, 2023
Look! Five New Snake Species Discovered in a Habitat Devastated by Mining
By Robin Bea
Science
Jan. 29, 2023
Are coyotes dangerous to dogs and cats? Here’s how to keep your pets safe
By Tara Yarlagadda
LEARN SOMETHING NEW EVERY DAY.
Related Tags
Share: