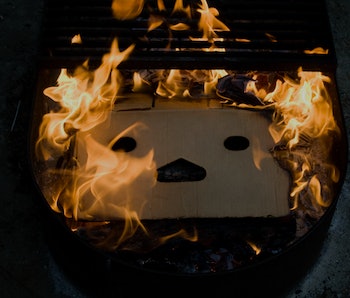 If you look at mound of rocks on the seashore and think that looks like a penis, you are not a perv. Nor, if you look at the gnarled bark of a tree and see a face, are you crazy. You are actually just experiencing pareidolia, a very normal thing that happens to everyone.

Originally named by Russian psychiatrist Victor Kandinsky, pareidolia is an information-filling phenomena. Because the brain is a predictive organ, it is constantly trying to make sense of the world. This means that it is hyper-sensitive to looking for patterns. Sometimes this means that you see a boulder with a split in the middle and your brain goes that’s a butt.

Humans process ambiguous stimuli using mental processes known as conceptual evaluation and cortical processing. We are hardwired to look for faces because it’s evolutionary advantageous: You want to find your loved ones in the crowd, or notice a pair of eyes getting ready to leap at you in the darkness. Humans are social animals that, when alone, make easy pickings for tigers. That’s why this tree looks funny.

“To the brain,” write the authors of a memorable 2012 pareidolia study by the Beckman Institute for Advanced Science and Technology, “the vaguely Elvis-like potato chip truly can provide a substitute for the King himself.”

In a 2014 study published in the neuroscience journal Cortex, a team of researchers looked at face pareidolia in particular: The illusory perception of non-existent faces. In the study, they showed 20 Chinese volunteers images with blobby, gray-scale images and told them that 50 percent of them had either faces or letters — which they, in fact, did not. The subjects reported seeing faces in 34 percent of the images and seeing letters 38 percent of the time.

The researchers discovered that the fusiform face area, the part of the human visual system that is specialized for facial recognition, demonstrated a specific response when participants believed that they “saw” faces instead of letters or just pure-noise images. This led the researchers to believe that, while the brain creates an erroneous match between what is seen and what is actually there, there is still a strong top-down component to how the brain processes images. That’s why even the suggestion of a face makes your brain go FACE. In other words, we’re not paranoid; pareidolia has a physical basis.

While pareidolia is very normal, other researchers have determined that your mental state does affect your tendency to see what isn’t there. In a 2015 paper researchers from the NNT Communication Science Laboratory in Tokyo determined that people who were more likely to feel they lacked control were also more likely to perceive illusory patterns within meaningless noise. They had 166 participants look at a piece of dotted paper and instructed them to connect the dots and make a picture if they thought there was an image. Approximately 77 percent of the subjects saw an image. When the researchers evaluated the neuroticism of those who saw images, they realized that people with higher neuroticism tended to see pareidolia. This is also the cognitive reasoning for why some people are more likely to be conspiracy theorists — the more neurotic you are, the more likely your brain is always scanning for patterns.

Humans aren’t the only entities that see faces in nature: Robots are starting to as well. Beginning in 2013 German design studio Onformative began a systematic search for pareidolia, utilizing a program they created called Google Faces. The program scans hundreds and hundreds of satellite images with a face detection algorithm, and determines when a grin can be made from a strange loop of mountains. Eventually they may be able to move from just looking for faces and seeing butts in nature just like you and me.