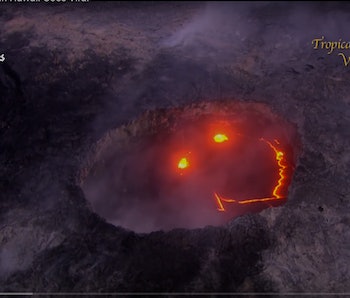 A Hawaii tour company caught the world’s cheekiest volcano in the act of giving humanity a sideways smirk last week, and, well, it’s hard to know exactly what to make of it.

Mick Kalber of Paradise Helicopters and Tropical Visions video shot the footage of the active Pu’u ‘O’o crater of the Kilauea volcano Thursday, and the emoticon-esque image has since traveled digitally around the globe, as regular folks wonder “WTF?” and “LOL?”

Here’s how this volcano went all emoji on us: Kilauea is among the world’s most active volcanoes, and has been erupting nearly constantly since 1983. A recent surge in lava flow saw new magma pour from the Pu’u ‘O’o crater, over an emergency access road, and finally reaching the ocean last week, creating new land mass for Hawaii’s Big Island.

As for the smiley, there are two things going on. The “eye” shapes are created by an upwelling of hot magma through the cooler surface by convection currents, according to Live Science. On the far side, the opposite event occurs, as negative pressure cracks and pulls the cooler magma away from itself, revealing the bright spots below.

But lines and dots traced in hot magma are not necessarily a smiley face unless a human brain interprets it as such. The explanation for this is pareidolia, or the tendency to perceive familiar patterns, especially faces, from a visual stimulus. (It could also involve an auditory stimulus, like hearing secret messages in a record played backwards.)

Add to this anthropomorphism — the tendency for people to assign human characteristics and emotions to non-human objects or beings — and you get the distinct impression that the Kilauea volcano has chosen this precise moment of global connectivity to play a weird trick on the world.