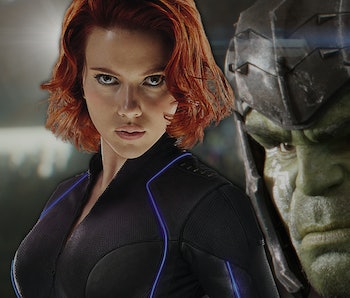 If, while watching Thor: Ragnarok you were surprised and confused to see a third Avenger make an unexpected cameo, you’re not the only one. Black Widow does make a surprise appearance in the movie, but she’s speaking to us from the Age of Ultron.

So, if you’re scratching your head over the Black Widow cameo in Ragnarok, and why it ties into Hulk becoming a galactic gladiator out of nowhere, fear not. Here’s how it all went down.

Spoilers for Thor: Ragnarok are below.

In Thor: Ragnarok, inside the Quinjet which Thor hopes to use to escape Sakaar, the Hulk de-morphs into Bruce Banner (Mark Ruffalo) after a video message from his (ex?)-girlfriend, Natasha, aka Black Widow (Scarlett Johansson), plays inside the jet. The video is Natasha’s last message to Bruce, pleading him to switch the Quinjet out of stealth mode and come back to the Avengers.

It all went down in the end of 2015’s Avengers: Age of Ultron, where the Hulk hated being a danger to everyone. So the climax of his arc in Age of Ultron was ignoring Natasha and allowing the Quinjet to keep flying. Since even Marvel doesn’t care to over-explain it, the Quinjet somehow lands on Sakaar, leaving the Hulk to become a warrior-slave for the Grandmaster (Jeff Goldblum).

Truly, a lot has happened in the two years since Ultron, so you’d be forgiven if the specifics have slipped your mind. I mean, just look at what’s gone down since 2015: Iron Man and Captain America got into a fight, Spider-Man showed up, Ghost Rider and Inhumans too, and the Defenders assembled and disassembled on Netflix. It’s been a lot! And all this time, the Hulk was fighting as the champion for the Grandmaster, where Thor catches up with him.

Now that Thor and the Hulk, the “Strongest Avenger” have reunited, the march to Avengers: Infinity War has truly begun as Thanos makes his way towards Earth. And at some point, after Thor: Ragnarok, the God of Thunder will find himself crossing paths with none other than the Guardians of the Galaxy.