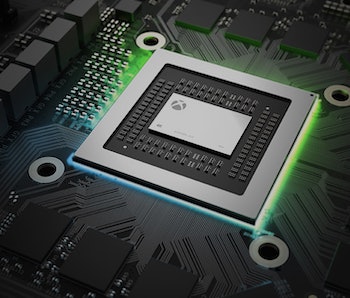 Microsoft released a software update for the Xbox One on Tuesday, bringing a slew of new features that will make navigating the interface faster and enable easy data transfers between consoles, including to the new Xbox One X.

The company is gearing up to launch that new console on November 7, which will offer gaming at 4K resolution thanks to a more powerful graphics processor.

“Get a head start on Xbox One X,” Mike Ybarra, corporate vice president of Xbox platform engineering, said in a blog post. “Your console setup experience will be quicker for both new users and upgraders. There are new options to help save time when moving from one Xbox One to another (including Xbox One X), so you can get back to playing faster.”

The new console, priced at $499 with one terabyte of internal storage, offers six teraflops of performance compared to the original Xbox One and Xbox One S that have around 1.3 teraflops. In practice, this means enhanced games can run at 4K resolution with higher frame rates and more graphical effects. It competes with the PS4 Pro, which is priced at just $399 but only offers 4.2 teraflops of power.

With the new update, Microsoft has made a number of changes to make the launch as smooth as possible. These include:

Beyond these changes, Microsoft has made a number of changes for all Xbox One consoles. These include a faster dashboard with extra shortcuts, a personalizable home screen that allows up to 40 pinned shortcuts, an enhanced notification system, and the ability to capture game clips and screenshots at 4K resolution with high dynamic range. The update is free and available for download via the console.

Watch the Xbox One X in action here: